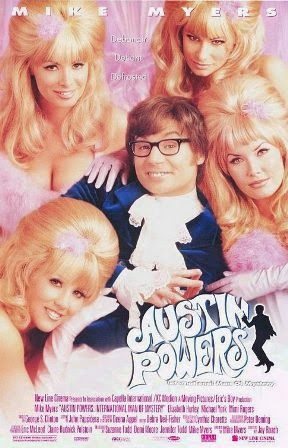 In 1997, Mike Myers, star of the Wayne’s World films, introduced the world to his newest movie trilogy. This one was a spoof on the hugely successful James Bond franchise as well as other films, except that the hero here, Austin Powers, hammed up his British roots (Myers pulls off the role very well; although a Canadian, he has British connections via his parents) to become a sixties swinger as opposed to the perfect gentlemen that Bond was and remains. Plus, whilst Bond had an appetite for women which was more a charm as part of his character, in Austin Powers a desire to have sex IS the character: although his primary focus is to prevent terrible things happening, his obsession with females often threatens to steer him off-course.

This first movie of what would become a three-parter begins with Powers having fun one night in his nightclub, surrounded by many beautiful women (who hilariously know exactly who he is, despite him supposedly being a secret agent), as well as his assistant Mrs. Kensington (Mimi Rogers), only to be subject to an attempted assassination by Dr. Evil (also played by Myers, a running joke that is never acknowledged throughout the series). Powers avoids this fate by punching the villain’s assailant (a woman who turns out to be “a man, man!”), but Dr. Evil gets away in a space rocket disguised as a Big Boy statue, which cryogenically freezes him for 30 years.

We then jump to 1997, where Basil Exposition (Michael York) reveals that Powers froze himself in response to Evil’s actions, and with reports that the Doctor is back on Earth with plans for world domination and/or destruction, it is time to release Austin in an attempt to stop the diabolical plot. The scenes where Powers comes back around are funny, as are the items he left behind. We also meet Vanessa Kensington (Elizabeth Hurley), daughter of Austin’s old partner who is Powers’ new sidekick. Unlike her mother, though, she has no desire to sleep with Austin, insisting she is work-focused and that times have changed since the 1960s when casual sex was the norm.

Meanwhile, we are introduced to Dr. Evil’s team of scallywags, including his number 2 man (“His name … Number 2”), played by Robert Wagner, and Frau Farbissina (Mindy Sterling). Other evil members of the squad include Patty O’Brien, played by Paul Dillon; Mustafa, played by Will Ferrell; Random Task, a deliberate parody of Odd Job played by Joe Son; and Alotta Fagina (as in, “a lot of vagina” … get it?), played by Fabiana Udenio. Evil is also surprised to learn that he had a son created in a lab during his time in exile, Scott Evil (Seth Green). Seeing a relatively normal young man trying to win the love of his dangerously evil father is very amusing, especially later in a scene where they attend a therapy session and Evil freely admits that he wants Scott killed, and reveals daft parts of his background: “My mother was a 15-year-old French prostitute named Chloe with webbed feet. My father would womanise, he would drink. He would make outrageous claims like he invented the question mark. Sometimes he would accuse chestnuts of being lazy.”

Still, while the developing relationships on both sides are of importance, the primary plot is about Evil’s desire to hold the world ransom for money, despite Number 2 having made his empire a multi-billion dollar enterprise called Virtucon while he was frozen, which then becomes an attempt to get more money by stealing nuclear weapons after Evil learns that his ideas had already been done, and his behind-the-times approach surfaces again when he initially suggests a ransom fee of 1 million dollars; under advice, this becomes one hundred billion dollars.

Powers bumps into Evil’s associates at a casino, leading to a humorous assassination attempt scene. But as Powers and Vanessa uncover the Project Vulcan which Evil has in mind, the two become smitten, yet Austin feels that it isn’t right for them to have sex. Which makes it funnier when he does later sleep with Alotta Fagina with his justification being that he had to do this to get the required information about the project.

Eventually, Austin and Vanessa are captured by Evil, as he closes in on the time where he will proceed with his dastardly plot even if he receives the money. The two are trapped, but even if they find a way out, can they stop Dr. Evil before it is too late? Will Austin’s sexual temptations prevent the duo from staying on the same path? And is everyone really on the same page on Dr. Evil’s team? Plus, if they do survive, what will become of Austin and Vanessa’s relationship?

There are many comedic elements, many of which parody the stereotypical aspects of super-sleuth films of the past, such as the apparently dangerous yet not completely threatening devices (Dr. Evil puts Austin and Vanessa in “the unnecessarily slow-moving mechanism”), the lack of importance given to minor characters (a deceased henchman’s wife wonders aloud why nobody ever considers them), deliberately bad production (an extended laugh by the evil crew, a threat to world leaders being interrupted by a clip from Beavis & Butthead) and other moments of mirth. And we haven’t even mentioned Evil’s cat Mr. Bigglesworth!

This is a great comedy film; it is a little slow to progress at times, and it looks very old-fashioned when watching it now despite it only being released in 1997 (and I mean the 1990s-era scenes, not just those from the 1960s), but it is a very funny movie with a lot of laugh-out-loud moments. It helps to be someone not embarrassed by sexual innuendo as there is a ton of that here; but even if it isn’t your thing, you should find a wealth of enjoyment from the movie spoof elements, the silly dialogue between Dr. Evil and his team, and the one-liners which are repeated to this day by die-hard fans of the trilogy. Myers, in particular, deserves great praise for perfectly playing two very opposite yet equally funny characters (some would say that Evil is the funnier of the two), and for writing the screenplay as well.

As this is part one of the series, you might guess that this is the peak with the subsequent two films being slightly disappointing add-ons. But you’d be wrong: movies two and three (which I will cover in future reviews) are both very funny and, if anything, this is probably the least amusing of the three parts. Don’t let that put you off seeing this film though: Austin Powers: International Man Of Mystery is a comedy treat from which you will take a great helping of entertainment.

Movie Review: The House With A Clock In Its Walls