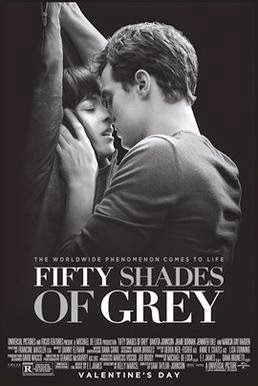 The long-awaited (by some) motion picture version of Fifty Shades Of Grey, the surprise hit novel of 2012, was recently released to great fanfare (that it was premiered the week of Valentine’s Day was no coincidence). However, before I got round to seeing this film, I had heard a lot of people saying how boring it was, and how disappointed they were with the movie. Was it as bad as people claimed or were the poorer elements more noticeable because of all the hype? I was about to find out.

I should point out before going any further that I had not read the original book, so whilst I knew of the themes which the movie would contain, I was unsure what the plot was about. Therefore, the storyline as a whole would be fresh to me, whereas those who had read the book and loved it would have known exactly was coming, which could perhaps explain part of the reason why they did not enjoy the film as much as they would have hoped for.

The movie begins with Anastasia “Ana” Steele (Dakota Johnson) covering for her friend Katherine “Kate” Kavanagh (Eloise Mumford)E in travelling to Seattle to interview Christian Grey (Jamie Dornan), head of Grey Enterprises. She is totally nervous and, due to her nerves, she comes across as unprofessional when interviewing Grey. However, whilst he clearly notices her somewhat less-than-stellar interviewing skills, and uses his intimdating presence to show his superiority, he is willing to overlook this because, as we learn, he has something of a crush on her. Due to their vastly different backgrounds and levels of wealth, the relationship develops very slowly, and we only know for sure that the two are getting closer when, after Grey brings Ana back to his hotel room after discovering her in a drunken state on a night out with friends, the two share a passionate kiss in an elevator.

Even at this point, though, the assumption (or at least my assumption, being someone who did not read the novel) is that the two would become an item, I hate to say it, but “the normal way”. But whilst their love for one another turns physical, we learn that Grey is only willing to do certain things with her on a social level, and insists on Ana conforming to his desires when it comes to what they get up indoors. He even has a contract drawn up for her to sign, which strikes her as odd; why would she have to sign a contract to become a girlfriend to this multi-billionaire?

We soon discover why when we see Grey’s so-called “play-room”: Christian enjoys performing sadomasochistic activities, and always being in control, even at times admitting that he feels his other half should be “punished” if necessary. Ana is shocked by this but, being a virgin before she met Grey, she feels that she has nothing to lose by going along with a relationship that looks rosy on the outside, but the details of which remain very secretive. She does insist on certain things which she simply will not get involved in as she gets to know Grey more, and he is willing to listen, but with the contract unsigned, there is still a sense of distance that Christian puts between the two before he is willing to fully commit. This is despite the fact that he showers her with expensive gifts, including a new car and a laptop. In the end, though, her insecurities force her to at least experience what would be “the worst”; after this, Ana simply cannot comprehend why Christian would find this pleasureable and leaves.

Sorry to spoil the ending, but let’s be honest: if you see this film, it is mostly because a) you read the novel and loved it; b) you haven’t read the novel but want to see it for its feminist ideology, or c) you’re being dragged along by your girlfriend. (Hey, it’s true.) As for me? Well, I’m a film reviewer and so it stands to reason that I should at least go and see one of the most anticipated films of 2015 and provide a review. Well, that’s my excuse anyway (only joking).

Seriously, though, I actually did not find the film to be too bad. There isn’t a great deal of excitement but I wasn’t bored watching it. I felt that the relationship between Christian and Ana built slowly and logically, or at least logically under the circumstances. The believability of how two people of completely different backgrounds would begin such a relationship was questionable, as was the manner in which Ana dropped something of a key revelation about herself, and within minutes in screen time it may as well have not been mentioned (remember, I didn’t read the novel, so I assume that in the book, this was a far bigger aspect of the plot). Still, it flowed well enough, or as well as could be expected, even when we learn the truth about Christian and realise why someone of such wealth remains single. Oh, and the soundtrack is very good, and appropriate to the movie. No, really, the soundtrack is very good!

I didn’t think that the ending was up to scratch, though: we are told throughout about the importance of the contract being signed, and we are repeatedly informed that some sort of revelation about Christian which would truly explain the reasons for his behaviour were forthcoming, and yet the conclusion is abrupt and suddenly it ends without answering either of the burning issues. I know that a sequel is planned so perhaps we’ll get more information there, but purely from the perspective of someone watching this film who is new to the world of Fifty Shades, I found the ending to be sudden and a bit unappealing.

Jamie Dornan is believable as Christian Grey, in terms of playing an intense, intimdating yet at times charming man, although it’s unquestionable that his looks were prioritised over his acting skills when the casting was made. I actually thought that Dakota Johnson did a very good job as Anna. Considering the themes of this film, I expected the lead female character to be a raunchy, in-your-face girl who gave off the impression that she would be willing to do anything. Although the film includes some heavy physical content, at no point did I feel any less about Anna, which is a credit to the portrayal of her by Dakota. It’s not Oscar-level acting by any means, but it’s good to see nonetheless.

So, how to sum Fifty Shades Of Grey up then? I felt it was satisfactory but nothing more. It certainly wasn’t a classic film, but nor do I think it was a giant waste of time. I think those who had waited so long for it would be disappointed and understandably so, but only an absolute knock-out movie would match such expectations and, with credit to the original writer of the novel E.L. James, Fifty Shades was never going to be that kind of film. At the same time, those who had no time for the novel and had even less time for the movie probably wouldn’t see anything to change their minds. But for a someone who has read the novel and simply wanted to see it in action, or for a neutral observer, I think you’ll find it worth your while; do not expect a great film by any means, but it’s watchable enough that you should be satisfied, rushed ending aside.

And that’s the end of my review. Now, time to write the overall rati … oh, was there a word I forgot to mention in relation to this film during the course of the review? One beginning with “s”? Okay, okay, to answer that question before I finish … yes, there is, and it’s quite strong but it could be worse, so I doubt anyone (at least amongst the British audience) who goes to see the film will be offended by those scenes. Alright, now are you happy?