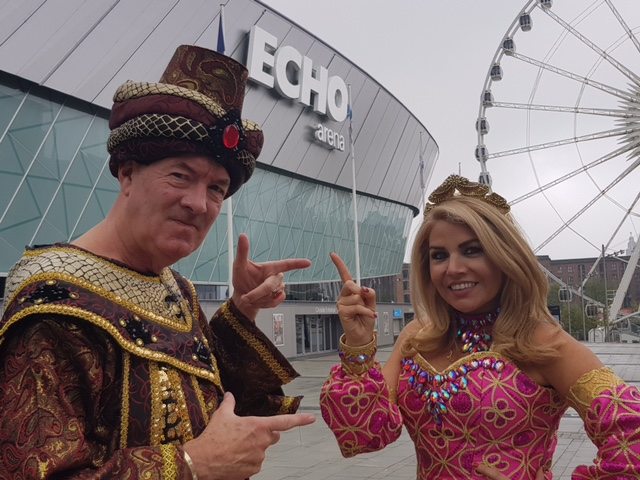 Aladdin will be bringing a ton of Christmas cheer to Echo Arena Auditorium this winter, and it looks set to be the best pantomime yet at Liverpool’s big arena. Two well-known Liverpudlians with vastly different backgrounds, Leanne Campbell and Dean Sullivan, are playing starring roles in the production, and so we sat down with both to chat about Aladdin, their careers to date and the wonderful world of pantomime!

First of all, discuss your characters in the Aladdin production.

Dean Sullivan: Well, I’m playing Abanazar. It’s a part that I’ve played around six times before, so if I haven’t got it right by the time that this show happens, I’m in trouble! (Laughs)

Leanne Campbell: And I live in his ring! (Laughs)

Leanne: I live in his magic ring, and I bring the goodness into the panto!

Have you both been fans of pantomime?

Leanne: Yes, since I was a kid, and always in Liverpool. Well, I’ve gone slightly outside, but never too far away, because when Liverpool comes up, you jump at it. The audiences are just wild, the kids are amazing … I think it’s a real part of Liverpool’s heritage now. I grew up going to the pantomimes with my nan and grandad, and people have routines to go on the likes of Christmas Eve. They wouldn’t dream of not going to the panto with their kids on Christmas Eve, as it’s part of the tradition.

Dean: So, we are the ones who work the hardest over Christmas! Two shows on Boxing Day!

Leanne: This year, we’ve got a nice little run, we finish on Christmas Eve so you’ve gotta be quick and book your tickets, because it’ll all sell out really quickly. It’s a massive venue, but I think there’s so much love, from the people involved this year who’ve done it so many times before. The people are coming to watch them, and we’re part of their Christmas.

What are some of the more memorable pantomimes that you’ve contributed to in the past?

Dean: That’s a hard one. I think I’ve done all of the pantos that there are to do, from The Sheriff Of Nottingham to Babes In The Wood, and as I say, I’ve played Abanazar about six times already. Also, two years ago in Stockport, I was offered the Dame. If you are involved in any pantomime production, you’ll know that the Dame works really, really hard. You’re never really off the stage much besides when you’re in the wings, putting on your next costume. So, it was a very busy show; I never stopped. So, I played the Dame and I loved every minute of it, but it nearly killed me.

Leanne: Would you ever play the Dame again?

Dean: I would, because it’s great fun to do, but you really earn your money. It’s hard work, as you have a busy old time. As Abanazar, I spend most of the time in the dressing room, which is great; I put my feet up and have a glass of wine, reading the paper … I shouldn’t have said that! (Laughs) But with the Dame, you’re on constantly, all of the time. You really do earn your money because you are busy. It was a great part to play.

Leanne: It’s lovely. There’s all of the classic roles like Cinderella, Snow White – the beautiful role to play. The costumes are gorgeous and you get to sing the sweet songs as well. But my character in this show, the Slave Of The Ring, is the funniest character. Hopefully, I’m going to bring a lot of Liverpool to it, a lot of what people already know about me on Radio City. If you listen to me there, you’ll know my sense of humour, and it’s going to be a good old laugh. It’s like me and him, tongue-in-cheek, and every show will be a different show.

Dean: So book your tickets now!

Dean, what would you consider to be the highlights of your time in Brookside as Jimmy Corkhill, and of your career in television post-Brookside?

Dean: That’s an interesting question. People used to say to me that you were there for 18 years, so why did you stay for so long in that one part? I used to say that it was because of the scripts and the storylines. My contract used to be renewed every 12 months, and I would say to Phil Redmond “What have you got coming up? What’s going to happen to Jimmy?” And they would always be fantastic storylines.

The two highlights on Brookside were definitely the drugs storyline, which ran for many, many years and had lots of different aspects to it, and the big storyline towards the end of the show, which ran for a few years as well, which was the mental health storyline. Jimmy was diagnosed with bi-polar manic depression, and that was a very, very interesting part to play. I didn’t know anything about it at the time, so I conducted a lot of research into it. I didn’t know much about drugs either, so there was research involved in that storyline too. Essentially, when we were doing those hard-hitting storylines, we had a responsibility to get it right. I used to say that I was only acting it, but there are people out there who are living it. so you had a sense of responsibility to them to tell their story, and to tell it correctly and with respect. They were the two big highlights, but I loved all of my time there over the 18 years, and it went by just like that.

Since then, I’ve played a few different bits and pieces, but there’s been nothing that has really grabbed me. I’ve often made guest appearances in shows like Doctors and The Royal. But unfortunately, in playing and creating such a big, iconic character, you’re often making a rod for your own back, because a lot of people are then a bit frightened of casting you in another role because they think that you can only play that one particular part. And it’s nonsense because you’re an actor, and you can play any role really. But I can never be taken away; I’ll be down in the television history books. I’ve got all sorts of awards at home for playing the part. So, it’s been fantastic.

What other projects would interest you for the future?

Dean: I’m leaning now towards the directing side of things. I’ve directed an original show about the first World War poet Wilfred Owen. A friend of mine wrote all of the songs, and I directed them for a tour of the North-West, which was fantastic. I like being on the other side of it, and having the responsibility of a whole production.

Leanne, how did you break into radio, and what advice would you have for anyone reading this who would be looking to pursue a career in radio?

Leanne: Try and get an afternoon slot! (Laughs) Early mornings are killers. The advice would be to just go for it, but not necessarily down the usual avenues. I was a trained actress; I’d just filmed The Ward, I’d been off to London to train, I came back, and I was doing a play at the Royal Court when a gentleman waited for me at the stage door. He said that I’d built up a name for myself, as I’d played Annie at the Playhouse as a child, and people seem to know who I was, so could he introduce me to a career in radio? The answer was no, as I couldn’t talk; was it a script or a play? No, I could just be myself. And it was scary, but it was the best thing that I’ve ever done, because I love it. It is exactly what I should be doing. To go down the same route that I thought I was supposed to be going down; sometimes, when you stray from that path, the best things happen. I went on to win a Sony award in London …

Dean: Well, you are fantastic on the show!

Leanne: Oh, thank you! My tips, then, would be to just be yourself, don’t try to be anybody other than yourself. Sometimes, you’ll make mistakes, but that’s just part and parcel of it. Just be you, and just be honest, and if people like you, then you’re onto a good thing!

What are your thoughts on Pete Price scaling down his radio career?

Leanne: I think it’s a great move for him. He’s seventy-odd; I can’t imagine myself being able to string a sentence together in my forties, never mind my seventies! The guy is a legend for doing it for as long as he has done and to still create a brilliant show. When he told me about it, I was like “It’s good for you.” It’s got a retro feel to it for those who remember the heritage Radio City of vibe, and it was always on a Sunday night. I was guilty of doing the prank calls to Pete Price before I knew him; it’s part of growing up, and now I’ll happily encourage my kids to do the same! (Laughs) If he’s only gonna be on on a Sunday, I’ll just do one call so he doesn’t know my number! (Laughs)

What is the difference between performing panto in a theatre and performing in an arena, as it will be in Echo Arena Auditorium for Aladdin?

Leanne: Well, it’s in a theatre within an arena. So, it’s going to have the same theatre vibe, it’s not like we’ll be plonked in the middle with the audience all around us; it’s a real theatre set-up. It’s a beautiful Auditorium, it’s quite similar and like a larger version of the Floral Pavilion in Southport with the circular environment.

Dean: When I said to people that I was going to be playing the Echo Arena this year to star in Aladdin, they said “What, in the arena?” And I said no, it’s got a separate, purpose-built theatre just like the Empire. the Royal Court and the Neptune (or the Epstein as it’s called now).

Finally, what should the audience look forward to when they come to see Aladdin?

Leanne: Me and him! (Laughs)

Dean: It’s a show packed with fun, songs and laughter.

Dean: And you’ve got us!

Aladdin will fly into Echo Arena Auditorium from Friday December 15 to Sunday December 24. To book your tickets, click here.