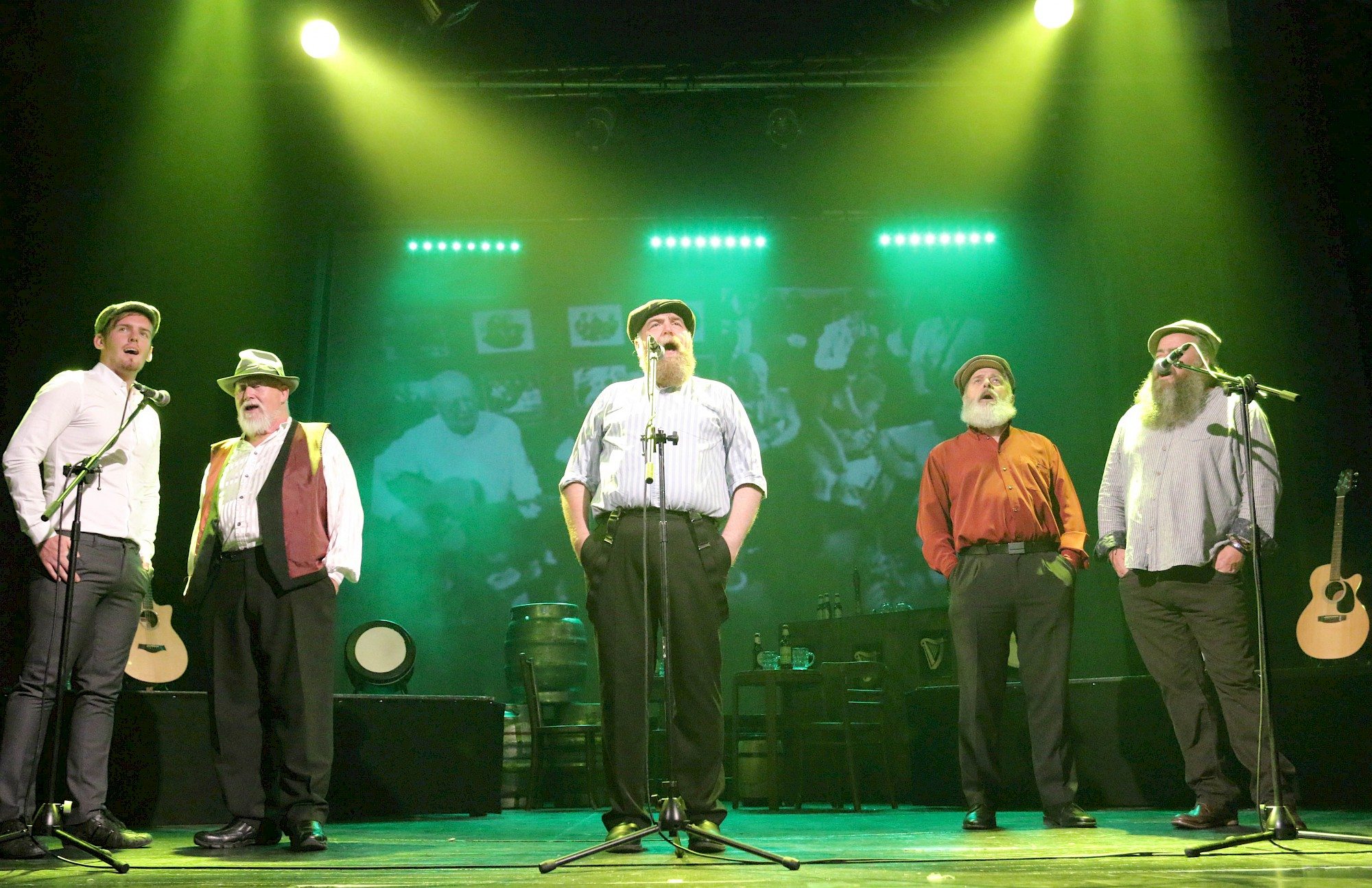 Seven Drunken Nights tells the story of The Dubliners, arguably Ireland’s most famous home-grown musical group, a band which had humble beginnings and went on to captivate audiences across several continents. The members are no longer with us, but their music will live forever, as this show emphasises.

The set was a backdrop for the streets of Dublin, with signs for Guinness and the Temple Bar, and there was a bar set-up on the stage to represent the famous O’Donoghue’s. There were also Guinness crates under the lamp and a coat stand, a familiar sight for an old-fashioned pub.

The cast began by introducing a melody of Black Velvet Band and Wild Rover, a true “diddly-dee” orchestral number. Irish Rover had the audience clapping all the way through, a sign of things to come from this show. Ged Graham acted as the main narrator, and did a great job in recapping the highs and lows as well as inserting some one-liners here and there.

After the opening songs, they truly began telling the story of the band; one member who had previously been a busker managed to persuade the owner of the local O’Donoghue’s pub to let him perform, which of course extended into the group growing as time went on. As the story unfolds, black-and-white film of the 1960s era of Dublin is shown, along with all of their most recognisable and traditional songs being performed.

We learn that The Dubliners sold over 30 million records worldwide, and were known as Ireland’s favourite sons. They would also perform Sunday sessions in the Royal Hotel, which increased their popularity. Comedy was a big element of the show in both the music and the dialogue; Billy Barton, son of Tommy Barton, was either 89 or 92 depending on when you asked him; who knows the truth? His performance belied his age, though, as his dancing was very good as well as his singing and overall musical ability.

Over the years, there were eleven different members, and each member brought their own specific qualities to the group. Originally called the Ronnie Drew Ballad Group (which would sometimes be confused for the Ronnie Drew Ballet Group, which raised some laughs), they soon changed their name to The Dubliners based off the classic book by James Joyce. As their fame increased, the songs within this show became more recognisable, and the audience were invited to join in for a sing-a-long, to which they of course complied.

In 1967, they appeared on Top Of The Pops with the song Seven Drunken Nights (which took us into the intermission). This song was performed as part of a recording session, not necessarily with the intention of it being a stand-out hit. But the tune (banned in Ireland for some controversial lyrics in the closing verses; this was 1967, remember) made them huge stars, and it began a period of peak popularity for the lads from Ireland’s capital.

The second half began with some old advertisements for Pearl & Dean and other products, as well as mock recreations of their appearances on Sunday Night At The London Palladium, at the height of their fame. They appeared on other programmes such as The Ed Sullivan Show, and they began to tour around the world, from Germany to Sweden to Austria to Australia. Their fan bases increased accordingly, and even the likes of The Beatles, Elvis Presley and Jimi Hendrix became fans. In 1970, they began working with producer Phil Coulter, and their success continued.

But not long after, the band began having set-backs, as various members were suffering from health problems that led them to either leave the group temporarily or permanently. Luke Kelly died at the age of just 43 in 1984, and to pay tribute to him, there was a great, emotional performance of Town I Love So Well, which elicited a fair few tears from the crowd. The show finished with three popular songs: Dirty Old Town, Molly Malone and Wild Rover, which had the audience up on their feet and waving their arms. They were encouraged to use their phones to light up the room, and this further energised the cast; Conor Elliot even played a violin behind his back to the final melody!

This felt like a great extended mix session, which got more familiar, and got the audience more involved, as it went on. I’ve rarely heard a crowd as loud and enthusiastic in the Empire as I did for this production, with a few songs bringing the proverbial house down. It was hard to make out some of the singers at times, and the lighting was a little strong early on, but otherwise this was sensational, capped off nicely by the cast members mingling with the audience for autographs and photographs when the show was over.

I couldn’t recommend this show enough. It was a truly perfect retelling of The Dubliners story, and it will greatly please both those who know their history and those who are hearing about them for the first time. It’s a first-class production that I urge anyone with a real interest in music to see.