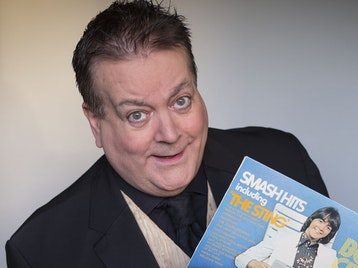 Bobby Crush has had an extremely varied career lasting more than 45 years, having originally made his name as an up-and-coming pianist on Opportunity Knocks, and enjoying some major highlights since then. He can currently be seen on the ITV1 show Last Laugh In Vegas, and he’s also about to visit the Liverpool Empire Theatre amongst the cast of Summer Holiday. We spoke to Bobby about Summer Holiday, Opportunity Knocks, Last Laugh In Vegas and more.

First of all, tell us about your character in Summer Holiday.

I’m playing the character of Jerry. I’m obviously a little too elderly to be playing the Cliff Richard role; that will be played by one of your locals Ray Quinn. The part that I play is of Jerry, who is an agent. In the story, there’s an American female pop star who is feeling a bit put-upon by her agent and her mother, so she disguises herself as a boy in order to get on the bus with our lads and tour around Europe. My role as Jerry the agent is to try and track her down, and to try and encourage her to come back to work and make records. So, I do this with Stella, who is her mother, and between us we try and follow them around and foil their plans to go from continent to continent. Eventually, we do catch up with them, and of course there is the obligatory happy ending.

Are you a fan of the movie Summer Holiday yourself?

Well, I remember the movie from when I was a kid. I remember my sister taking me to see it when I was about 8 or 9 years old. I remembered all of the songs from that time; they’re iconic songs, such as Bachelor Boy and Summer Holiday of course. In our version, we perform lots of other Cliff Richard hits as well, so it’s a big treat for the Cliff Richard fans. It’ll be a real stroll down memory lane for them. But yeah I do remember the film, and of course I’ve got it on DVD recently to remind myself of how the original people approached it in a movie fashion. Our show is different to the film; we keep the same storyline, but there are a lot of instances that are different in terms of music and the comical content as well.

You first became famous through the TV show Opportunity Knocks. How big of a chance was this for you, given how television and show-business in general were very different back then to what they are today?

Oh, gosh! Well, it’s very different now. For young people, when I explain to them about Opportunity Knocks (as they wouldn’t have heard of it), I describe it as the fore-runner to The X Factor in that it had the same kind of impact on a young person’s career. You could be a total unknown one day, and the next day you could be landed with a recording contract and your own television series. But it was a much more innocent age. When I did Opportunity Knocks, they just presented the act, and the public decided whether they wanted to see you come back the following week or not. We had nothing like back-stories, and you never got to see any of the rehearsals or any of the behind-the-scenes stuff. That was all kept from the public. All they saw was the finished article. But of course, nowadays half of the programme is about the auditions and the upsets that are caused before you actually get to the stage. So, it was very different.

Also, it was before phone-voting. When I did Opportunity Knocks, you had to send in postcards; the show would go out on a Monday, they’d count up the postcards on a Thursday, and you’d be told on the Friday whether or not you were coming back next week. So it was quite quaint, you know, and television these days is quite fierce in terms of being warts-and-all. But back then, all that side of the preparations and the auditions was all hidden from the public. Now, it’s all part and parcel of the finished article.

You have released a number of songs including Borsalino and The Sting. Would you be interested in producing new songs again in the future?

Yeah! I’ve made 15 albums as a performer, and I haven’t recorded in a while. But I’m on Last Laugh In Vegas right now, and as a result of that, I’ve got a couple of record companies sniffing around at the moment, with a view to me possibly doing an album. So, the thought of possibly getting back into the studio to create some more music would be great. I would very much welcome that.

You’ve also appeared on a number of television shows, including Benidorm, which has been on the air for a number of years. How did you find this experience, given that you were filming in such a Brit-heavy location?

I loved doing Benidorm. That was an offer that came right out of the blue. Darren Litten, who is the writer of Benidorm, created a new character for me called Billy Sparkle, who was a bit of a jaded and faded old cocktail pianist who works in a not-very-good bar, and who is a bit bitter and twisted. I did that a couple of times on the telly, and I’d love him to consider the character coming back. It was great fun; there were some great scenes, we had a real laugh, and they took really good care of us, so I enjoyed that a lot.

As noted, you’re currently appearing in Last Laugh In Vegas. Was it intimidating to go out and introduce your talents to an American audience?

I’ve played in front of Americans on cruise liners before, but I’d never actually played on American turf. So, that was something else entirely. It’s the dream of a lot of performers to actually one day step out on a Las Vegas stage. My career is 46-years-old now; I came into the business in 1972, so I never dreamt that at this stage of the game that I would be given these kind of chances. But it would appear that older people now are back in vogue with shows like The Marigold Hotel and 100 Years Younger. They’re realising that there may be mileage in older, more experienced performers. So, when I was given the chance to do this show, I grabbed it (like all of my colleagues did) with both hands. And think that I went out there as the youngest at 64, and Bernie Clifton was the oldest there at 81, it’s quite something for established performers at this stage of their careers to be given these kind of chances. So, it was great, and I was really happy to do it.

The end result is on Tuesday; they show a regular episode on ITV1 at 9pm, and then you can switch over to ITV3 at 10pm, and they’ll be showing the full performance, the big show that we did on the Saturday night for the Las Vegas audiences. It’s also allowed me to be discovered by a whole new generation; my website almost crashed the other day with people sending messages, who had seen the show and enjoyed it. I would have expected that from fans of my generation, but there are loads more younger people that have been reacting to it, and saying that they love seeing all the scrapes I’m getting into, and that we’re bickering amongst each other, and that I’m not afraid to say my piece. So, it’s actually been quite gratifying.

Finally, what can the Liverpool audience expect from Summer Holiday?

The fact that we’ve got Ray Quinn in the show is very good; the roof will come off when he steps out on stage on the opening night as he’s a bit of a local hero. I think we’re expecting the Liverpool audiences to really react well to the show. I’ve not been back to the Empire for a little while; I was last there on tour a few years ago when I was on tour with Gene Pitney. I don’t think I’ve been to the Empire in the last 5-6 years, so it’ll be nice for me to go back. And of course it’s huge! It’s a very big capacity theatre; I think it’s one of the biggest in the country. So, we’ve certainly got our work cut out in terms of filling it, and I certainly hope that people enjoy the show, and that word-of-mouth is strong enough for us to have a really good week there.

Summer Holiday performs at the Empire Theatre from Tuesday May 8 to Saturday May 12. To book your tickets, click here.