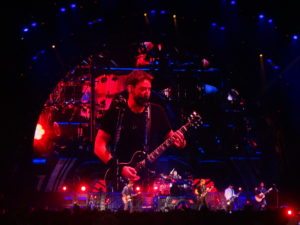 Nickelback returned to Liverpool’s Echo Arena, providing a show to remember as a treat over a busy and sunny Bank Holiday weekend. The date and the relative closeness to their previous Liverpool gig seemed to harm the attendance, but it certainly didn’t have any negative impact on the show as a whole, nor on the performers who made sure that everybody had a good time.

Newer fans of the Canadian rock band, or those watching Chad Kroeger and co. performing live for the first time, will have come away with a spring in their steps after hearing their most memorable hits such as Rock Star, Hero, How You Remind Me and Burn It To The Ground, the latter of which ended the night on a high note with a real head-rocker of a tune (seriously, try listening to that song without aggressively nodding your head to the beat!). Meanwhile, longtime fans will have been equally satisfied by hearing entries from the band’s vast back catalogue, and a point was made to include at least one song from each of their albums to date, including a medley of songs from their very first album Curb, providing a treat for the die-hards who have followed Nickelback from the beginning.

It wasn’t just about the music, though. There was plenty of humour and audience interaction between songs, from Kroeger explaining some unusual moments that the band had encountered in the past to audience members giving some questionable requests. In addition, two lucky attendees (named Adam and Lucy) were given the opportunity to sing Rock Star alongside the band, though their confidence and dance moves suggested that this may not have been their first time performing to a crowd (which Kroeger himself acknowledged)!

The best shows are those where you can tell that the performers themselves are having a good time, and that definitely showed here. Kroeger (who handled most of the discussion between songs) always had a smile on his face as he addressed the crowd, as did his bandmates. They were happy to change things up, such as their sudden decision to play Hero, and the renditions of their hits matched the high expectations that their fans had. The lighting and video effects also complimented the songs well, from personal photos being shown during Photograph to fire and smoke effects greeting the main chorus of Burn It In The Ground. Seether also got things off to a good start as a suitably hard-rock warm-up act, making this a fun night for any fans of this genre of music.

In closing, Nickelback put on a great show that I’d definitely recommend to fans new and old, and for those who made the mistake of not coming along due to the timing, make sure you’re on hand when the band next come to Liverpool, no matter how soon or how long it may be!

The Greatest Hits Of Motown – How Sweet It Is Show Announcement – Empire Theatre, Liverpool