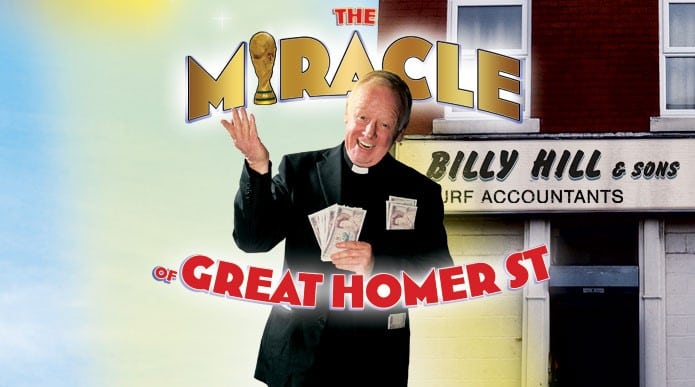 The Miracle Of Great Homer Street comes just in time for the World Cup, as this plays a key role in the story.

The opening scene sees Father Aherne (Les Dennis) on his knees praying to St Cajetan (Jake Abraham), asking for help in his quest. Cajetan reacts comedically by saying “Hey Tony, you’re bothering me a lot”, all in a thick Scouse accent. The priest basically explains that the World Cup (this is based in 1978, incidentally) is starting, and could he let him know the scores. Cajetan is bewildered, but he goes along with it, as he’s told that it’s all part of a plan and that he will explain more as the tournament continues. The background to St Cajetan is that he was an Italian priest who helped to set up a bank for poor people many centuries ago, and it still operates today as the Bank Of Naples (Naples being the patron saint of gamblers in Argentina).

We then visit the living room of a family home. It’s the typical scenario, where the mother (Marion, played by Catherine Rice) is busy tidying up, while the father (Terry, played by Andrew Schofield) is sitting in his underwear reading the newspaper. She reminds him that they are expecting a visitor (Father Aherne), who is going to stay with the family for a bit. Terry isn’t pleased, but Marion, who has a very strong faith, is adamant. They have a daughter, Bella (Katie King), who is just becoming a punk rocker. They did have another son called Liam, but he died a few years earlier. Terry hasn’t worked for a while, so the money is tight.

Aherne arrives to stay, and he gains the trust of Terry while watching the football. As each game happens, Aherne asks Cajetan what the score will be, and he gets an unsuspecting Terry to place bets; soon, the money is rolling in. Marion is none-the-wiser, as she is just happy that Terry and Aherne are getting along.

Meanwhile, Bella brings home her new boyfriend Jamie (Bobby Schofield), a singer in her band that plays in Eric’s Club in town; the band is Johnny and The B-stards, and one song is called “F–k Off and Die” (yep). Neither Marion, Terry nor Aherne are impressed by his controversial views. Cajetan grows concerned at what Aherne is up to, but he is persuaded to keep giving football results. Terry also becomes nosey, and eventually Aherne tells Terry of his plan to get every result from Cajetan in advance, then to get Terry to bet on that score at different bookmakers around the city, with him getting a cut of the money.

Terry can’t believe it at first, but when his earnings reach £1,000, he’s taken in by the scam. But he isn’t allowed to let Marion know, as she is highly against betting. Eventually, they get to the final match, and if all goes to plan, they will both be very rich. However, at this point, while Cajetan tells Aherne the score, he says that there is more to it than that; Aherne is not interested in other factors, though.

Problems arise when Bella is watering a plant in the living room and accidentally spills water over the TV, causing it to break. Terry and Aherne are horrified, but believe it doesn’t matter as they know what the score will be anyway, and that they’ll win a million pounds if they are correct. Before the match begins, Terry asks Aherne if he will hear his confession, and reluctantly he agrees.

It appears he’s carried a guilty secret for years: apparently, his son’s death was in a road accident, but the truth was that Terry had sent him to buy cigarettes in the rain, and during that trip, he was hit by a car and killed. Marion was out at the time, so she has never learned of this. Aherne then confesses to Terry that he was only going along with his plan to get back at all of the bookmakers, as his own father was a terrible gambler years ago and left his family penniless, to the point that his mother killed herself. He always blamed the bookmakers for her death, so he wanted to win as much money as he could to put them out of business.

The match goes on, and at the end, Terry calls his neighbour to find out the result, but because they already know, Terry and Aherne are already dancing in the living room, singing “We’re In The Money” as they celebrate. Marion, Bella and Jamie look on intrigued. Terry tells Marion that she can have a new coat and shoes, while Aherne says he’s going on holiday all over the world. Terry reminds Aherne that he had said he was setting up a bank to help poor people, but Aherne says he has changed his mind. A disgusted Terry says he doesn’t want the money, and would rather be poor and with his family.

St Catejan then appears to tell Aherne to check the score. He only gave him the full-time score, but the match went to extra time, meaning that the bet will not pay out, and that they have lost the chance to win the million. At the end, the family realise that they don’t need money to be happy, but the people in your life, while Aherne decides not to retire and goes back to the priest house.

There were great performances by all involved, and the plot was easy to follow. The lighting was good, while there wasn’t much in the way of scenery changes. The references to Great Homer Street were surprisingly minimal, and while the crux of the story is comedic, the laughs weren’t quite as roof-raising as those for previous Royal Court productions such as Council Depot Blues. It would have been nice to see more of Bella and Jamie, but the show in general did make a refreshing change from other shows at the venue.

Overall, it’s a fine show, and a timely one with the 2018 World Cup about to begin. Just try not to concoct any similar schemes ahead of this year’s major football extravaganza, because chances are that it won’t succeed! (Well, unless you bet on England going out early, since that’s a given.) 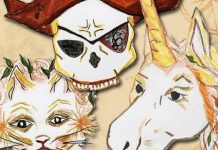 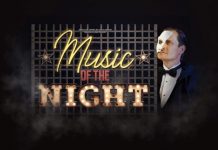