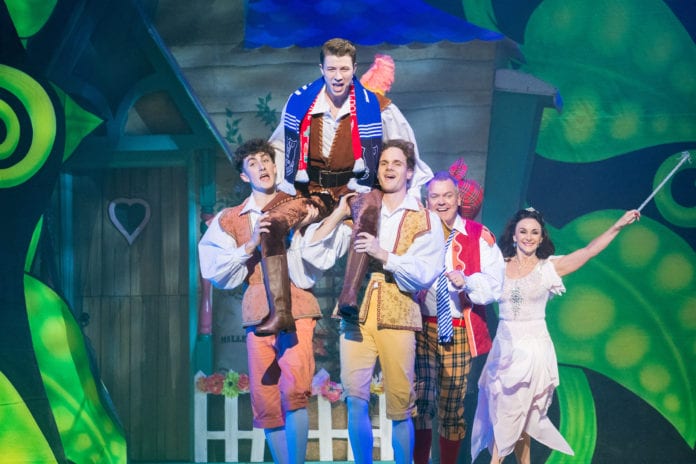 The Empire Theatre promised big things – giant things! – with its latest festive panto offering, and it’s safe to say that they have greatly succeeded.

Jack & The Beanstalk opens in the village where we meet the villain, Fleshcreep (Daniel Taylor). Then, we’re introduced to Jack Trot (Alex James-Hatton) and his pals, not least his brother Simple Simon (John Evans) and his mother, Dame Trot (Iain Stuart-Robertson). He tells us that he loves Princess Apricot (Clair Gleave), but he can’t find the courage to tell her. Jack’s family are told by Fleshcreep that their rent has increased and that he’ll throw them out the next day, but they realise that to save the day, they could sell their pet cow, Moo Moo. This leads to a great scene where a bunch of animals (played by The Liverpool Empire Babes amongst others) join The Trots for a big sing-song of Talk To The Animals.

Mother Nature (Shirley Ballas) is the fairy of the tale, and she occasionally appears to lend a helping hand. This includes some great dance scenes, particularly in the second half with Simple Simon as part of a mini Strictly contest. I should mention at this point that the costumes were very good, not least for the animals, and in particular the very cute sheep and lambs! It also makes for great use of stage space, although the rest of the auditorium were also used for chases and audience interaction (of which there was plenty).

Meanwhile, as Jack and Princess Apricot begin to express their love for one another through song, Jack is sent to sell Moo-Moo, only for the wicked Fleshcreep to buy the animal for what Jack is told would be 50 golden nuggets, but is actually just a few magic beans. The Trots are unhappy, but Jack is assured by Mother Nature that if the beans are thrown out of the window by Dame, then a beanstalk will grow. During this time, Fleshcreep also manages to kidnap Apricot, giving Jack a further reason to try and grow a beanstalk to challenge Fleshcreep and rescue those closest to him, though the lure of an evil giant (who we see at various points) is intimidating to all.

After a funny bedtime routine involving all three Trots, they awaken to – yes! – a super-sized beanstalk. As Jack and co. plan their venture into the clouds, we see Simple Simon involved in some great comedy scenes. Along with a string of one-liners, we also get a fantastic moment where he is trying to translate a whole bunch of tongue twisters with the clear intention to try and catch him out (due to the possibility of a swearword popping up) making things even funnier, as well as Simon being tested before a school exam, and Simon also discussing what he bought at the supermarket. These elevated the show to an even higher level, and is a testament to the superb comedy talents of John Evans.

Jack, Dame, Simon and Mother Nature all ascend into the clouds, and after more slapstick in the form of Simon miming plenty of classic song lines in response to observations by the others, they begin to look for Apricot. We’re then treated to an excellent 3D experience, as the giant’s lair sees all sorts of creepy creatures jump into sight, which had all the kids wearing their 3D glasses excitedly screaming. This was a spectacular presentation that was enjoyed by everybody, and was the highlight of the evening.

Eventually, Jack manages to locate Fleshcreep and finds a way to release Apricot. But a confrontation with the Giant leads to a big chase around the Empire, and even sees Simon trapped in a cage by a giant rat (to which he quips “It’s Gary Neville!”). They return to the ground, but the giant ends up falling off the beanstalk, and crushes Fleshcreep in the process, which leads us to the big Jack/Apricot wedding to close the show. Before then, though, we had several of the cast singing 12 Days Of Christmas with a more local feel to it, but this interlude was made funnier by the ad-libbing and seemingly-accidental screw-ups that included the kids in the crowd tossing around a set of toilet rolls, Simon inadvertently removing one of the speakers from the side of the stage, and the entire backdrop being pushed down by a tripping Simon, which caught everybody by surprise in a good way.

This was a first-class show, with a tremendous effort by all involved (though I felt that John Evans and Shirley Ballas were the stars of the night). The settings were very well-done and were very carefully and authentically designed, the props were unique, the costumes were exceptional, the songs and dance routines were memorable, the comedy was spot-on, the story was easy to follow, the 3D experience was brilliant, and the additional ad-libbing and breaking of character via the cast members laughing only added to the fun. This was the perfect pantomime evening, and one that I urge everybody to see this Christmas. 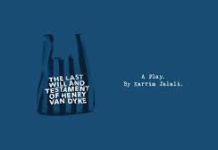