On Saturday June 1st, NXT ran its twenty-fifth TakeOver event, aptly named TakeOver: XXV, out of the Webster Bank Arena in Bridgeport, Connecticut. This was interesting timing for a TakeOver show in that it did not fall on the same weekend as a WWE main roster pay-per-view, as has become customary in recent years. The card delivered strongly, with four championship matches and one grudge match set up for the show. The latter was up first, as Matt Riddle took on Roderick Strong of the Undisputed Era.

Riddle has had his issues with the Undisputed Era in recent weeks, as he has found it necessary to come to the aid of NXT Champion Johnny Gargano in his wars with the leader of the Era, Adam Cole, and was often a catalyst for tensions within the ranks of the Era, after his interference caused them to lose matches. Riddle was also bloodied by the Messiah Of The Backbreaker in an attempt to show his loyalty to Cole. That attack set up this match here, and a barnburner it turned out to be, with both men’s technical, striking styles on full display, and some epic fast-paced, hard-hitting sequences also in store. The finish was a particularly brutal struggle, as Riddle had Strong on the canvas and was laying in some nasty elbow strikes. Strong managed to rise to his feet, but Riddle still had him in his clutches, and after some more elbows from a standing position, Riddle picked him up and hit a modified jumping tombstone to pick up the victory. With all four members of the Undisputed Era in action on this show, their first combatant had fallen to defeat. Would this be a sign of things to come for the group?

The former NXT Tag Team Champions the Viking Raiders were recently called up to Monday Night Raw, and as such were made to vacate the titles prior to this one. Their NXT swansong came in the form of an NXT TV title defense against the Street Profits, which was ruined when the Forgotten Sons ran interference and got the match thrown out, since they felt they were more deserving of an title shot than the Profits. Oney Lorcan and Danny Burch would join that post-match melee, and a Ladder Match for the now-vacant titles was made for TakeOver, with a reunited Undisputed Era also joining the fray. The Ladder match was everything you could hope for from an eight-man fracas where anything is legal. There were amazing high spots and weapon spots galore, with the match certainly giving the highly acclaimed Ladder Match for the inaugural NXT North American Championship a run for its money. The tide seemed to turn in favour of the Forgotten Sons when Jaxson Ryker emerged from the back and joined the battle in the ring. He would soon clean house, but once everyone recovered, he found himself a victim of a six-on-one assault! With the other six competitors paying Ryker too much attention, Wesley Blake and Steve Cutler tried to take advantage, but the eagle-eyed Street Profits were equal to them. Angelo Dawkins dove between the legs of the ladder to spear Cutler out of his boots, and Montez Ford sprung from the top rope to the rungs of the ladder to clean Blake’s clock and claim the titles for himself and Dawkins. It seems that the title match from NXT TV between the Profits and the Viking Raiders was booked simply as a tease for what was to come, rather than a way to give the Profits a rub in the form of a non-decisive TV title match and then give the Forgotten Sons a bigger one in the form of a victory at TakeOver, which is what I was expecting. This was an amazing moment for the Street Profits and I am happy to have been proved wrong.

This match was thrown together rather hastily when the planned bout between North American Champion Velveteen Dream and Dominik Dijakovic had to be nixed thanks to an injury to the challenger. Nevertheless, they did a pretty excellent job booking a replacement, finding one of the most exciting clashes of character in WWE today in Velveteen Dream and Tyler Breeze. The story that they established in the TV promo battle, and in the excellent pre-match hype package, is that Dream considers Prince Pretty to be a pale imitation of himself, and considers his reemergence in NXT to come down to the fact that he can’t cut it on the main roster. Tyler’s riposte to this is that he feels inspired by Dream’s title, and wants it for himself, which isn’t so much a comeback as an affirmation of Dream’s point, but that’s another debate! Seeing as Breeze’s status is still technically as a main roster Superstar, who was going over felt too obvious and that removed some of the drama from the match. But it was still an excellent contest. The finish was also a bit messy for my taste. Both men were on the outside, and Breeze was struggling to get Dream back into the ring before the referee reached ten, so re-entered himself to try and plead with the referee to stop counting, seeing as he cannot win the title on a countout. He turned around, and Dream was up, about to swing the belt at Breeze. Prince Pretty grabbed it off him, threw it to the referee, turned around again and was hit with a Dream Valley Driver followed by the Purple Rainmaker for Dream to retain the title. Post-match, Tyler was also made to look a bit of a chump, as he stopped a gloating Dream from leaving the ring to snap a selfie together. I could understand this angle if Dream was gracious in victory, but he was anything but. Anyhow, it is a shame that this was in all likelihood a one-off match in NXT for Tyler Breeze, as he is certainly one of the most charismatic performers on the roster. I am pleased in the end, though, to see Velveteen Dream’s reign as North American Champion continue.

The story here was the continuing reign of terror of Shayna Baszler, but Io Shirai actually had the last laugh. Tensions between these two had been building for weeks, with one of the high points being Baszler’s beatdown on Shirai’s tag team partner Kairi Sane, who is now wrestling on SmackDown Live. Shirai’s new running mate seems to be Candice LeRae, who Io made the save for recently on NXT TV, and who promised Io she would return the favour and have her back in this one. LeRae’s presence ended up being much-needed, as midway through the match Baszler’s buddies, Jessamyn Duke and Marina Shafir, made their way to ringside, only to be stopped in their tracks by a Kendo stick-wielding Candice. Sadly, Baszler picked up the win anyway, as she locked in the Kirifuda Clutch on Io, and after a very long struggle, the Genius Of The Sky tapped out. Baszler’s celebrations, however, were cut short. Shirai, incensed by the weeks of beatdowns at the hands of the Three Horsewomen, absolutely destroyed her with LeRae’s Kendo stick. Not only that, she delivered one regular top-rope moonsault, and a second whilst holding a steel chair. This was a new aggressive side to Io Shirai, and one that seems to indicate this war is far from over.

Ever since he lost to Johnny Gargano for the NXT Title at TakeOver: New York, Adam Cole has felt hard done by because he scored the first fall in their 2 Out Of 3 Falls match. In any other championship match, according to Cole, he would have been crowned champion right there and then. Since then, the rivalry between these two has grown gradually more embittered, with Cole having to also deal with tension within the ranks of his stable, the Undisputed Era, although that seems at this point to have been resolved. Nonetheless, Cole was not accompanied to the ring by any of his stablemates, but simply by internet rapper Josiah Williams, who spat some amazing bars over the Undisputed Era’s entrance theme! Definitely a highlight of the show for me. This match itself was simply outstanding. Big move followed big move from the get-go, and the action between the ropes for me produced the match of the night. One particularly strong moment was when the heel Cole suckered Gargano in by pretending to beckon his Undisputed Era teammates out to the ring to help him. By the time Gargano realised it was a ruse, he was left open to a Last Shot from Cole. This wasn’t the finish, however. That came, amazingly, when with the action at a fever pitch Cole hit his Panama Sunrise destroyer, followed by another Last Shot knee strike for the victory and the title. This is an interesting piece of booking and interesting timing for a title change since it was Gargano’s first defense. Presumably, it means more Gargano/Cole matches are on the horizon, as if Cole had slipped to two defeats versus Johnny, it would be hard to justify another match. Gargano, however, now looks like the kind of wrestler who can win titles but struggles to keep hold of them, as he also lost the North American Championship at the first time of asking to Velveteen Dream. But the big development here is, of course, Adam Cole becoming NXT Champion. His three stablemates may have all lost their matches, but the leader now holds the most prestigious prize in NXT. And that, dear reader, is Undisputed.

Overall, this was another excellent TakeOver event, with interesting story developments and huge title changes befitting the grandiose occasion of the twenty-fifth show, and I am looking forward to seeing how these events are built on heading into the next installment of the series. 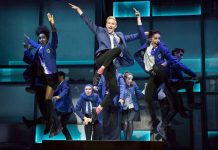