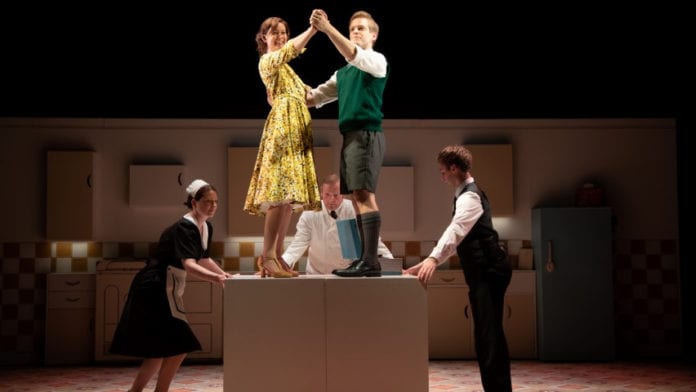 Toast, adapted from Nigel Slater’s best-selling memoir of the same name, is a feast for the senses. As I entered the Playhouse auditorium, I was enveloped by the smell of toast. The  kitchen stage set, that took up the whole back wall, was already visible but not fully lit. The smell and the set together gave the impression of an empty house after the family had finished breakfast and abandoned the bubble of their home life to take on the world that day.

On reflection, those first impressions foreshadow the play’s telling of Nigel’s premature loss of his mother, and the end of the world as he knew it.

Giles Cooper is able to capture the famous chef’s tone, wit and character – even when playing him as a nine-year-old boy. Nigel’s vulnerability and innocence is juxtaposed against his mother’s realisation of her own illness in a particularly poignant way, as the two dance on gently rotating kitchen units as if in a fairy tale. Katy Federman’s portrayal of Nigel’s mum is excellent. Federman’s doubling as the cook who takes Nigel under his wing as a teenager is a reminder that Nigel never forgets his mother as ‘it’s impossible not to love someone who makes you toast’.

Blair Plant as Dad gives a multi-layered performance, of someone living up to the traditional father role expected of him, but also at times able to express genuine affection for his son – and often using food to help him show it.

Henry Filloux-Bennett, who adapted the book into the stage play, does not simply present a dramatization of events in Nigel’s life. Nigel is our guide throughout, jumping from being in the midst of the action to talking directly to the audience in hindsight about what those moments meant. Nigel’s own narration becomes a running joke in the play. One or two times it is perhaps overstretched.

Interspersed with the narration are choreographed sequences, explaining the rules of sweets in the playground and showing Mr Slater’s growing attraction to Nigel’s soon-to-be stepmother Joan, played with great presence by Samantha Hopkins. The sequence that demonstrates the combative and competitive nature of Nigel’s relationship with Joan, fought through cookery, is a particular highlight. The carefully curated music, from ‘I Feel the Earth Move Under My Feet’ to ‘Psycho Killer’ ties together the scenes and the movement between them.

The play is visually stunning throughout. It even has its own food director in James Thompson, working alongside designer Lubby Watson. A lemon meringue is a sight to behold. The large kitchen set does not change throughout, but still we are transported to the garden, school, a car, a beach holiday and restaurants thanks to clever prop changes and lighting. A clever change in the colour of moveable kitchen units from soft yellow to shocking green highlights the stark difference between Nigel’s childhood home and the one he is forced to move into when his father marries Joan.

This is a play about shared nostalgia. Brand names are mentioned fondly throughout, and one could hear laughs and approval from the audience as they recalled their own memories. It reminds us how central the making and sharing of food is to our humanity. It creates a rhythm, gives us certainty, and brings us together. It can take us to lands far away.

The senses it evokes – smell, taste and touch, can take us anywhere. Toast reminds us of the importance of the senses and how they can help us relive the happiest times in our lives, no matter what is going on in the world around us.

Toast runs at the Liverpool Playhouse until September 14