Elvana is a charismatic tribute band that perform songs from 90s grunge band Nirvana and legendary rock n roll singer, Elvis Presley. An unlikely mashup that works strangely well in my opinion. I had the chance to watch the band at the O2 Academy in Liverpool on Saturday 11th January 2020. It was a very comical and energetic night, that’s for sure!

Before Elvana came on stage, there was a support act called Oh My God It’s A Church. They were without a doubt the best support act I have ever seen. They were a parody of a strict Alabama style Church. The frontman being a cowboy hat wearing preacher. They are a comedy style funk band that cover songs such as ‘Proud Mary’ and ‘bang bang’. They even performed their own songs, my personal favourite being Sexy Jesus, whom we were to ask for salvation from. They certainly did their job in warming up the audience. I’ve never seen a support act engage an audience quite as well as they did. I even thought, how can Elvana top this? Well they did.

After a rather long but highly entertaining support act, Elvana finally took to the stage. As always, Elvis (frontman) walked onto the stage in an extravagant Elvis Presley style outfit complimented by A Dave Grohl style hairdo. Right away, I knew what I was in for. The left and right side of the stage each had a line on yellow balloons. All with the well-known nirvana smiley face print.

As a big fan of both Elvis and Nirvana, I had high hopes for Elvana. Although I suppose I was a little sceptical about how the two could work together. However, as strange as the concept may be, it worked extraordinarily well… better than I thought possible. They began with a heavy grunge song that got the crowd bouncing and throwing up their hands. Then they played In Bloom, a classic Nirvana song. It was during this song that thousands of confetti pieces rained down over the crowd. Normally this happens at the end of a gig during the big finale, it was very unexpected but still very exciting. I probably should have known that an Elvis/Nirvana tribute band would do something out of the ordinary.

The band was also very involved with their fans. Asking the crowd to repeat things back at them and to join in singing the songs. They would also come near and hold hands with members of the crowd, it was very intimate for such a hugely outrageous show. It was obvious to me that Elvana has a great fan base. I could tell it from the moment they walked on stage and the whole crowd shuffled forward to get a better glimpse. I could tell by the way they danced and sang along or even laughed along. When Elvis asked ‘Who’s been to see us before?’ I thought I might have been the only one who didn’t scream! I love how Elvana can bring together two types of people, Elvis and Nirvana fans and create their own community. I don’t know many bands that can have two types of fans!

Throughout the show, they spoke with strong American accents, mimicking Elvis, and constantly using his most famous catchphrase ‘thank you, thank you very much’. It was quite the surprise to find out the band actually come from Newcastle-upon-Tyne.

Elvana looked like they were having the time of their life on stage. Especially the guitarist Danny Cobain. He was knee sliding, crowd jumping whilst at the same time playing every note perfectly. The energy was at its highest during Smells like teen spirit, Nirvanas most popular song.

I enjoyed Elvana very much. I love the concept and I love how much the band love it too. I also think, it’s not just about the comedy, I had to acknowledge their talent too. There’s no doubt that they all know how to play their instruments, not too different from Nirvana themselves!

I would urge anyone to go and see Elvana if the chance arises. I also think you should keep an eye out for Oh My God It’s A Church! 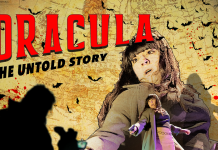 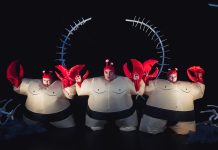