Ahead of their upcoming UK arena tour, Stereophonics dropped by Liverpool’s Mountford Hall to provide a warm-up show for their 2020 nationwide journey. And after seeing this, I was immediately thinking about seeing them again later this year, because this gig was sensational, and one that had the Liverpool audience thoroughly engrossed throughout.

Nadia Sheikh provided the support for the show, delivering such original songs as Toxic, Break Free, Far Away, The Shadows and Get Away, the latter having been released as a brand new single this past Friday. Sheikh did a great job, and overcame some technical issues for the backing band by not skipping a band and ensuring that the fans were not only kept entertained, but became more appreciative of her efforts as a result. It’s worth keeping an eye on Nadia, who has built up a strong following on the indie scene over the past few years.

Then, it was time for Stereophonics to come to the stage, and the crowd were more than ready for Kelly Jones, Richard Jones, Adam Zindani and Jamie Morrison to wow them with a mixture of the old classics and their modern hits. The early stage featured some of the band’s more catchy tunes as a way to get the audience fully invested into the performance, with songs like I Wanna Get Lost With You, Maybe Tomorrow and Hungover For You. Front man Kelly then discussed his previous trips to Liverpool, including his very first visit back in the mid-1990s, along with an unexpected run-in with Paul McCartney and Kanye West at the O2 Academy just a few blocks away!

The belting tunes continued with Fly Like An Angel and I’m Alright, with a mix of the crowd jumping up and down, singing along and capturing the moment on their phones. The beat slowed down with a series of songs that seeked to identify with those who had encountered struggles, amongst those being Traffic and Make Friends With The Morning, but even when the pace was reduced, the energy remained high for the band and attendees. The tempo increased again with some of the best Stereophonics songs of all: Don’t Let The Devil Take Another Day, the unforgettable Have A Nice Day, Mr. Writer, Just Looking and The Bartender And The Thief. The encore covered C’est La Vie and, after a personal thank you message from Kelly to the adoring audience, they ended the show with probably their greatest hit, Dakota.

With a rainbow-coloured drum-set and a red Welsh dragon ornament, there was a real attempt to make this show a definitive Stereophonics experience, and it lived up to all expectations; as a matter of fact, the show surpassed them. Kelly Jones was simply awesome on vocals, while Richard Jones and Adam Zindani provided the sublime guitar-riffs that elevate Stereophonics tunes to a level that very few can reach, never mind master. And Jamie Morrison? His finest moment of the night came when he ended one of the tunes with an extensive drum solo that was incredible to see and hear, and which resulted in one of the night’s biggest reactions.

One of the things I really liked was how literally any fan of the group, from a long-time devotee who has followed the band from day one, to any new supporters who are just discovering the foursome, could come along and not only enjoy the evening, but find themselves easily learning the lyrics and singing along. Of course, this was as strong a Stereophonics following as you would anywhere across the United Kingdom so engagement was always high, but whereas other live shows benefit strongly from everybody knowing all of the songs to a tee, this was an occasion where you could enter as a novice and leave as a major enthusiast. The timing of the show was spot-on too, ensuring that fans got to hear all of their favourite songs while still wanting more, and the lighting helped to set the desired mood for specific songs. And I would also have to assume that the band were happy to once again perform in a smaller setting: given that they have become accustomed to the major arenas, it was probably a nice reminder of their early days by getting to return to the more intimate and jam-packed Mountford Hall, where the energy levels were so high as to match any auditorium across the country.

Simply put, Stereophonics were terrific. The entire show was a real gem, with Nadia Sheikh serving as the ideal support act. This may have been a warm-up for their big-budget tour, but even as a complete one-off, this couldn’t have been any better. If any Stereophonics fans are reading this review, I strongly urge you to attend one of their arena shows because I have rarely enjoyed a night of live music as much as this one. Absolutely fantastic. 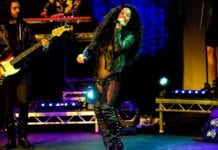