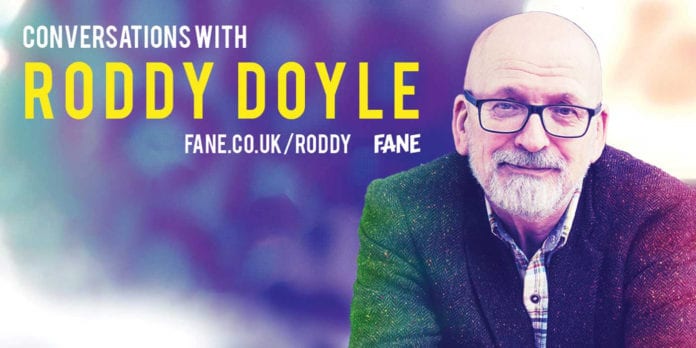 Imelda Quirk climbing over the fence, a drummer whose sound check technique is head-butting the microphone and the libido of Jimmy The Lips. These and a selection of other Commitments based references are all I knew of Roddy Doyle‘s work before I headed into Liverpool’s Playhouse Theatre on a dark and cold March Tuesday.

A pair of pre-poured glasses of water, adorning a small, black coffee table, flanked either side by a comfy armchair and the stage is set for a good old chat about the man of the hour. Oh, and the huge projector screen behind with the title ‘Conversations With Roddy Doyle‘.

The lights fade and on walks our host, Paddy Hoey. Having read his pre-written introduction, on walks Doyle, the two shake hands, take their seats and before the applause completely dies, Roddy mocks how they’ve just shaken hands and how he must keep his hand elevated from this moment on pending some form of sanitisation. The Coronavirus jokes are already being cracked. This is going to be a good chat.

Having a mother from Youghal, Co. Cork, I’m well versed with the Craic. The whit, the banter, the overwhelming impulse to make light of anything and everything. Something Doyle and I have in common. He eludes nicely before a short reading from A Star Called Henry, how it’s with such ‘happy guilt’ to write about other people’s misfortunes. This referring to the world which the protagonist is born into. The real nugget here is that Henry Smart is based on Doyle’s father. A man for whom Doyle himself said, wasn’t one to let the truth get in the way of a good tale.

Hoey steers Doyle neatly through his early years where we learn how he learned to read and who taught him. Reading comic books and his mother if you’re wondering; The Dandy and Beano among others. Doyle at this moment recounts the irony he learned later in life that both these comics were printed in Dundee by a Protestant publishing company who refused to employ Catholics. Had his mother known, Doyle would have grown up illiterate and we’d have none of his soon to be dozen novels and countless short stories.

He then talks of his choice of the fictional ‘Barrytown’ for a common setting in a number of his works and yet based loosely on his hometown of Kilbarrack. This allowed him both the ability to write with the comfort of familiarity and yet ‘play’ more as the geography wasn’t set in stone. A shrewd move from the fella who admits he’s more proud of being from Dublin than he is of his literary achievements. A Dublin that during his formative years, was seen as an outsider to the rest of the country. Recounting his trip around Liverpool earlier in the day, having taken the Beatles Tour up and around Penny Lane etc, he couldn’t help but draw parallels with the two cities. I’m inclined to agree.

Authors tend to be the quieter ones. The contemplative ones. The ones for whom the written word is their way of conversing. Not Roddy. He reminds me of a fun, slightly edgy uncle. One you’d want to spend time with. His anecdotal style is just as enjoyable as any good read. He’s engaging and learned, yet not forcefully and not so much as he comes across as a know-all. He’s the right mix. He knows and has seen more than he’s letting on and yet seems still transfixed and awed by the works of others.

Before the reading from Henry Smart, the part in which the lead character describes his own birth, the conversation leans towards the political. For a moment it feels like we’re heading for an all out state of address of the current situation with the opposing Fine Gael and Fianna Fáil parties but we stop just before lines are drawn too deeply. I wouldn’t have minded. It would seem Doyle and I have even more in common.

The second half begins with Doyle reading a passage from The Woman Who Walked Into Doors. ‘You don’t see me’. Such a piece. I’m almost certain I’ve seen it performed as a monologue in my college days. He went on to recount how, although he rarely talks about, let alone shares his work while he’s writing, he was approached by a local (to him) womens’ refuge offering help during the writing of the novel. Although refusing help, he did promise to share the manuscript with them prior to publishing and he did. The irony of coming out of such an establishment, with such positive feedback and one woman having asked him, ‘How did you get in my f***ing head!?’ was not lost on him.

A good Irish lad knows how to swear too. Not that the air was consistently ‘blue’, it was well timed. A short reading from his soon to be published, Love (June 2020) added to that blue hue. This led us nicely into the Q&A section and the first question. A question regarding The Commitments and what his ambition was with the book while he was writing it. His answer, in short, to finish it! Brilliant.

Having spent the evening in the company of the man, I’m a fan. I like him. If you’re already a fan, this is an absolute must-see. I’d taken my seat early in the theatre and as the final few patrons were filing in I heard a thirty-something lady say to her friend, ‘My teenage self is so jealous of me right now!’ As the house lights came up and I stood to leave, I could see why.