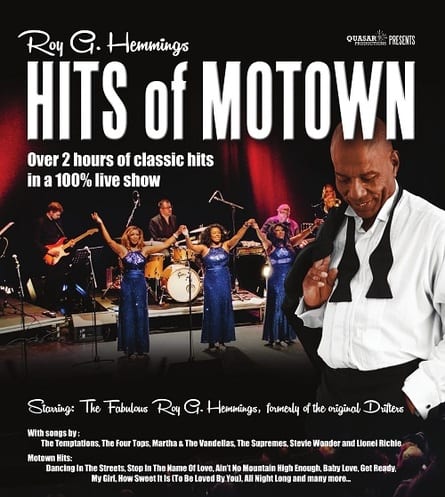 The Hits Of Motown starring Roy G. Hemmings arrived at St. Helens Theatre Royal on Saturday night, and I understand now why it was sold out weeks in advance!

Both critics and fans agree that Roy G. Hemmings is a great showman and a dynamic singer. Understood as the longest serving former member of legendary group The Drifters, Roy had worked alongside founder Johnny Moore for more than 20 years.

Roy was accompanied by The Love Supremes with smooth harmonies and slick dance routines, adding a stunning dimension to the show. With classic Motown hits by The Supremes, Martha Reeves and The Vandellas, The Four Tops, The Temptations, Marvin Gaye, Stevie Wonder and Lionel Richie, this electrifying show features such classic hits as I Heard It Through The Grapevine, I Can’t Help Myself and many more.

The show started off with a bang when the spectacular Love Supremes walked onto stage. They welcomed us with bundles of energy and started straight off with I’m Coming Out. Seamless harmonies and strong vocals were a pleasing start to the show, and they gently warmed us with three more numbers, finishing off their set with the classic Dancing In The Street, which immediately got a few members of the audience up on their feet. This led us straight into the entrance of the main man himself, Roy G Hemmings. To rapturous applause, he bounded onto the stage immediately matching the energy already set by the Love Supremes. His set started with the unmistakable driving bass riff of the classic Motown track that even the casual of fans will know, Get Ready. Roy’s voice is like butter: smooth and soulful with a fantastic range. His control is superb, he knows when to hold back and when it’s time, his ability to riff and hit the big notes was expertly handled and shown off to its full potential in songs like Me and Mrs Jones and Stand By Me.

Roy and The Love Supremes were backed by an absolutely fantastic six-piece band consisting of keys, guitar, drums, bass and brass section made up of sax and trumpet. These talented musicians created such a wall of sound for the evening with the stand-out brass section moment being their rendition of Superstition.

The evening was a non-stop ride through Motown’s Greatest hits. Roy was a well-accomplished frontman, his years of being in the biz served him well not only as the lead vocalist but also as the evening’s MC. His patter was short but well-delivered, and with his mentioning of his new album, a number of times he showed his playful side. The Love Supremes gave great value as they remained onstage backing Roy throughout his whole set. With effective choreography and stunning backing vocals, they kept up the pace of the show and encouraged us all to join in. The audience were up on their feet from the moment Roy took the stage, and they didn’t sit down throughout the whole show. The buzz of the theatre was alive, and the atmosphere was definitely electric! The energy of the whole cast was outstanding as this show is no mean feat. It’s a tour de force and a real showcase of Hemmings’ vocal ability.

All in all, this show is a definite must-see for any Motown fan, from the most casual to the most loyal devotee. I recommend you go and book tickets right now; you won’t regret it!