For all us Led Zeppelin fans, Mothership – Led Zeppelin Tribute at Floral Pavilion gave us a grand trip of rock and roll, melody and musical innovation that many would argue only Led Zeppelin could have created.

The sons of Mothership invaded the Floral’s Blue Room stage with the thumping Immigrant Song. The perfect song to start such a performance, the chaps gave us a great taster of what was to come. Custard Pie was duly served up to a hearty crowd that clearly weren’t put off by the current issues that have put our community into a pasta and toilet roll frenzy. Now warmed up, the band swashbuckled their way through Misty Mountain Hop, The Song Remains The Same and the incredibly powerful Hangman. Mothership don’t do gimmicks. They make no attempt to look like the Led Zep members; the lighting is rightly understated but they do use a film as a backdrop. Largely in black and white, it offers some really interesting glimpses into Led Zep’s life and maybe an offering as to what inspired some of their songs.

The band briefly stepped off the gas to give the head-nodders a little rest with the gloriously ponderous Going To California. This song allows lead singer Matthew Vaggers to demonstrate what a truly awesome voice he possesses with lead guitarist David Crilly offering a nice harmony towards the end of the song. It wasn’t long before the band returned to power with the awesome When The Levee Breaks, with Dave’s wonderful slide guitar flooding our ears, followed by Trampled Under Foot, featuring some wonderful hippy-funking keyboard playing by the band’s lovable background man, brilliantly assisted by Martin Byrne’s effortless bass playing.

They kept us waiting, but finally it arrived. The haunting Kashmir. Eight minutes of utter brilliance, with drummer Andy Perfect dragging the beat back in that Bonham-esque way. All good things come to an end, and so it did with Whole Lotta Love. Led Zep fans are a curious breed. Few freak out, many nod their heads, but an equal number stand completely motionless. How is it possible to not dance to this song?

I first saw Mothership some seven or eight years ago in The Swinging Arm pub in Birkenhead, and they’ve deservedly gone from strength to strength. Long may Mothership continue to give us back our Led Zeppelin days. 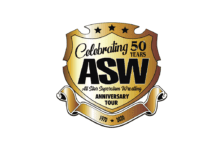