Ward Thomas have been well-established on the UK’s country music scene for more than half a decade. In that time, the twin sisters Catherine and Lizzy Ward Thomas have carved out their niche within the genre, as well as a special place in the hearts of their ever-growing fan base. Their planned show at Liverpool’s Grand Central Hall has been rescheduled for Saturday September 12, and so we decided to ask them about their anticipation to return to the road on tour, as well as their careers so far and their future ambitions!

First of all, how are you both coping with the current circumstances?

For us, it’s easier to be in isolation because we live in such a remote area. We have a little home studio setup, lots of bread flour for baking, and our animals. It can obviously get challenging remaining at home the whole time, but we feel fortunate to be in the countryside. We hope everyone else is coping okay!

How much are you looking forward to heading back on tour for the rescheduled dates this September?

We cannot wait to head back on the road. This tour is going to be very different from our last few, and it is hopefully shaping up to be our favourite. We are planning on it being a very intimate and “unfiltered” show, which is our favourite way to sing and showcase our songs.

One of the dates on the tour will be in Liverpool. How does it feel to perform in one of the most famous musical cities in the UK?

We LOVE playing Liverpool! The audiences are always so up for it and supportive! Liverpool definitely breeds music lovers!

Going back to when Ward Thomas were first formed a few years back, was it easier to establish chemistry as a duo given that you are both twins?

Being twins has always provided a nice piece of chemistry for us, and it’s something that you can’t fake, having been together since the womb. But as we have grown in the industry, the expectations have grown too. Our harmonies and our sibling story has always been our staple, but we have also seen the growing expectations as an opportunity to keep honing in on our craft as songwriters and singers.

What inspired you both to pursue country music in particular?

Country music was always the genre that spoke to us. It was always Dixie Chicks albums that we blasted out in the car, and it was always the country songwriting that inspired us so much. We have however, felt really inspired by all sorts of genres and played around with them in our past albums.

Your debut album From Where We Stand was released in 2014. It must have been a thrill to produce this compilation, and for it to then reach #1 on the UK Country Chart?

Yes it was a huge thrill. We had very low expectations for From Where We Stand because a lot of the songs on that album were some of the first we had ever recorded, and we really put it out there to see what people thought. It definitely surpassed any of our expectations!

You have since released two further albums, Cartwheels and Restless Minds. How was the fan response to these two collections compared with the first album?

Cartwheels was a hugely exciting moment for our career as it landed itself at the top of the official album charts. We felt like it was a sort of “coming of age” album for us. We hoped it could be the same for others, and the response reflected that. We have always felt like each album we have and will create is a reflection of that specific episode in time. And Restless Minds was a great reflection of the worries, joys, the lows and the highs of our early 20’s. We found a great reaction to this album with people of our own age who are also going through these transitions. And so it feels like the albums and the reactions have been good overall!

You’ve also recently released a new single titled Painted Legacy; I understand there is a special meaning behind this song?

This song was written shortly after our cousins (who are like siblings) lost their dad. He was always a very special man that was often described as “one of life’s good ones”. It was heartbreaking to see our cousins go through that grief of loss, and so we wanted to write a song to reflect the amazing dad he was and the legacy that he has left behind for his children.

What other singles would you consider to be your favourites to date?

Carry You Home will always be a special single for us, along with our song One More Goodbye. But all of them are favourites in their own specific ways.

You also provided a duet with James Blunt for the track Halfway. What was it like to work with James?

James was amazing to work with. It was a lot of fun to sing that song and even more fun to perform it every night with him in his UK tour.

What are your future ambitions?

We plan to keep writing songs and releasing them, and to keep touring until everyone has had enough of us!

Finally, what is something that fans may not know about either of you?

That’s tough as they all know a lot! But if they don’t… we are both mega country bumpkins, Lizzy is writing a book in her spare time, and Catherine has a horse and loves to knit.

Find out more about Ward Thomas by clicking here. 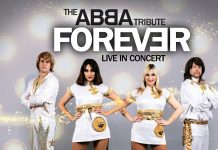