Having not read a book for over two years, Beth O’Leary‘s charming debut novel The Flatshare is so beautifully written that the quirky, heartwarming story wont be leaving me any time soon.

The story is introduced by Tiffy, emotionally dishevelled and without her own place after her recently-ended relationship, she is in desperate need of a flat, but with her rather timid budget she is limited for habitable options in central London. She’s an editor for a rather eccentric, free-spirited, crotchet-obsessed book writer who occasionally likes to recruit Tiffy (against her reluctance) as a model in her public crafting demonstrations! Leon is in need of some extra cash and has advertised his central London flat online for shared letting. He works nights as a nurse and only occupies the flat in the daytime- ideal for Tiffy who works regular daytime hours and will only occupy the flat at night! All seems perfectly fitting around their clockwork schedules, but Tiffy’s two protective best friends are not convinced, for there’s just one questionable aspect of this arrangement… it’s more than just living space up for shares in this stranger’s one-bedroomed-flat!

Tiffy is flamboyant, uncommonly tall, wears multiple colour-combinations in the same outfit and long bright orange-hair. Her character is similar to her outward appearance- bright and expressive. Leon wears long, dark curly hair, cartoon boxers and a modest lopsided smile. He is quiet, thoughtful, and his chapters are written so. You might say they’re almost like quick jots on a mental post-it-note, which is not too different to how the two ‘flat mates’ communicate… having never actually met! Their notes start out telling of dinner left-overs and polite reminders to put the toilet seat down left out for the other to see, but quickly develop into familiar and frequent, albeit fragmented, interaction they look forward to engaging in after a long day’s work. They might not recognise each other in the street, but they do recognise when something is up and they quickly learn of the challenges that each other are facing: a wrongly imprisoned brother and too-suspicious-to-be-chance ex encounters.

O’Leary creates a world where simply seeing someone’s mind and character is enough… almost, that is until an unscheduled, unfortunate (or maybe fortunate) coincident!

The cleverly creative writing style of The Flatshare is especially pleasing for those who are not a big fan of hefty chapters! The short, enjoyable chapters alternating between the perspectives of the two, very much opposite but equally lovable, main characters, provide a diary-like insight into their very different working London lives. O’Leary adds a unique twist to adopted classic ‘chick-lit’ moments, while subtly delving into deeper issues and harsh life truths that not only draw you closer to the characters but also build an extra layer of complexity; allowing a more meaningful message to be woven throughout this unquestionably entertaining novel.

O’Leary’s creation of authentic and captivating characters within a gripping, cleverly-told story line is beautiful. You really want it to be true- I felt as though I wanted to engage with the characters myself in parts. Being able to read both sides of the story, you feel somehow involved and completely invested. For fiction, it has a strong sense of realness through its portrayal of the characters’ thoughts, feelings and honest life experiences, but of course has heaps of hilarity that my face was forced to express! After each chapter you feel you have to know what the other character is thinking! And that ongoing cycle of wanting to delve into the other character’s mind makes the book unbelievably hard to close! The pages really do turn themselves.

This brilliant novel has reintroduced me to the joy of reading and I cannot wait to read her second book The Switch. 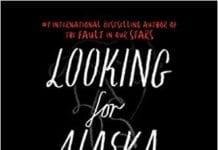