Home Alone 2: Lost In New York is an example of a sequel that easily matches, if not surpasses, the original. The first Home Alone movie was a smash hit worldwide, and Home Alone 2 maintained the same formula as its predecessor, as well as the same cast, with Macaulay Culkin again leading the way. The result: a second consecutive classic for the franchise.

The McAllister clan are planning another getaway trip for Christmas. (Can’t these guys just stay at home for the holiday season one time?) Owing to the previous Home Alone movie, Kevin McAllister (Culkin) remains in the eye of the domestic storm. Yet his parents Kate (Catherine O’Hara) and Peter (John Heard) are also mindful to not leave Kevin behind at home this time. There is an amusing tease where we almost see history repeat itself. Thankfully, this time Kevin, now 10, is with the family as they head to the airport for a flight to Miami, Florida.

But wouldn’t you know it? Somehow, the McAllisters manage tom lose Kevin again (I would be calling child services if that were to happen in reality). As a result, Kevin ends up on a flight to New York City. Now, NYC is hardly a poor substitute for Miami, but nevertheless, he’s all alone once again. Bear in mind, though, that Kevin is headstrong and capable of holding his own. This means that he books himself into a swanky New York hotel using his dad’s credit card. Revenge, perhaps, for his father’s continuing negligence? Meanwhile, Kate eventually discovers mid-flight that Kevin is missing yet again, and the McAllisters soon begin to track their journey towards reconciling with their youngest son.

In the meantime, though, Kevin is having a whale of a time in the Big Apple. That is, until he coincidentally bumps into two old friends: Harry (Joe Pesci) and Marv (Daniel Stern), the two burglaries from the first Home Alone flick. Unlike in the first film, they now know how crafty and cunning Kevin is. As a result, they’re confident that he won’t disrupt their plans this time. And those plans consist of looting a major toy store, one which aims to provide a significant donation to charity.

Cue Kevin plotting a scheme to not only halt the robbery, but to set up Harry and Marv by luring them to his uncle’s townhouse. If you know Home Alone, you would know that Harry and Marv could be in trouble at this stage. But even so, how could Kevin secure his own safety? And can Kate make it two-for-two with emotional family reunions?

As noted earlier, Home Alone 2 doesn’t divert heavily from what made the original film so entertaining. If anything, at times it feels like a carbon copy, from Kevin causing mayhem in the early scenes to the McAllisters almost missing their flight after oversleeping. But the key to this film’s legacy is the New York City setting. Not only are there stunning visuals that warm the festive heart, but there’s greater scope for organised chaos from Kevin. The first movie would see Kevin largely restricted to his own Chicago home. Here, he has almost all of NYC to visit, as he hopes to once again overcome Harry and Marv.

And just like the first movie, there are plenty of amusing moments here. This sequel is both self-aware by poking fun at scenarios from the original, but also ingenious in explaining how Kevin could be lost again. And because the circumstances are greater this time around, the struggle for Kate to return home also magnifies. However, the madcap stunts that Harry and Marv endure courtesy of Kevin are also stronger. This ensures that while the story is familiar to those who have watched the first film, there are plenty of sights to behold that keep audiences engrossed for this follow-up.

Sadly for Home Alone fans, this would be as far as the franchise could go, at least from an entertainment and legacy standpoint. By the time that Home Alone 3 hit cinemas in 1997, Kevin had outgrown the role. Plus, the story had already been stretched so far that anything larger (e.g. Kevin being stuck on the moon?) would have seemed even more implausible. As a result, subsequent Home Alone movies have almost gone unnoticed,. With a different name, perhaps they would be more fondly remembered. But one cannot help but compare Home Alone films from 1997 onwards to the original, and best, two. And there is no way that this franchise could ever top Macaulay Culkin and the gang.

Though it seems predictable and even rehashed at times, Home Alone 2: Lost In New York is a real gem. Kids and adults alike love it, and this sequel is as Christmassy as any movie gets. Add to that the heartwarming messages behind the on-screen chaos, along with the amazing setting and numerous unforgettable scenes, and you have another winner. Whether this is superior to the original or not depends on your own personal taste. But regardless, Home Alone 2: Lost In New York is another truly awesome family movie. 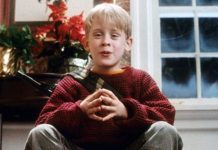