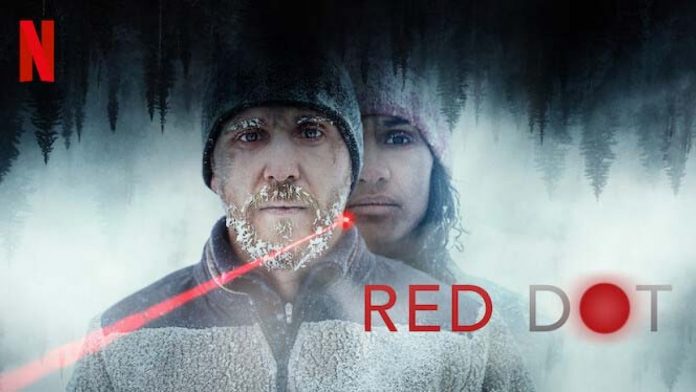 Horror films rarely utilise the idea that the bad guys will win in the end. Often, it’s a case of a villain cutting a swathe through expendable characters, only for an unlikely few to get away by the skin of their teeth. An atmosphere of true hopelessness is something hard to find in the genre. But when it appears it usually does so with great fanfare. Unfortunately, like the protagonists of many horror films, that atmosphere just slips through the fingers of Red Dot.

After feeling like their relationship has soured David (Anastasios Soulis) and Nadja (Nanna Blondell) decide to take a trip to Sweden’s frozen north in an attempt to rekindle their relationship. A romantic getaway camping under the northern lights. Just them, some cross-country skis, and their dog Boris. Unbeknownst to David Nadja is pregnant. But for Nadja their relationship has taken such a turn that she’s questioning whether she should keep it.

Along the journey the two have an uncomfortable interaction with some hunters, and in their haste to leave David accidentally collides with their car. Deciding it’s not worth the trouble to interact with them again he leaves without telling them. But, upon arriving at their lodgings for the night notice the hunters are also there. Out on the snowy plains staring at the green-blue lights in the night sky they notice a red dot scanning their tent. They soon realise they’re being hunted.

The film opens with the couple awkwardly getting engaged in the men’s bathroom of a university; A young couple in love with everything in front of them. It cuts to 18 months later, to a couple clearly sick of one another. These moments don’t really serve to establish who these characters are in a way that’s reflected later in the film. The couple being at odds with one-another wasn’t a necessary set-up for their trip. Fairly soon the turbulent aspects of their relationship is forgotten, and their conflict is forgiven by both parties.

As with most horror films characters constantly make decisions which will only frustrate you. Not only that, but the locale of sub-zero temperatures doesn’t seem to affect our couple one bit. At one point a character falls in a frozen lake and seems fine to just wear these wet, frozen clothes for the rest of the film. Logic goes out the window here. At this point it makes me wonder why they bothered setting it during the winter at all.

There are many story moments I enjoyed though, that furthered the tension. I won’t go into them here because they veer into spoilers. But there are a few times we see the couple getting the upper hand only to have it snatched away from them. It gives us moments of hope for their safety only for it to be cruelly taken away. The problem with these moments is that they could have been drawn out a little bit more. Let the tension build. Let us feel safe for a little longer before twisting the knife.

If you enjoy tense thrillers about people being hunted for no reason, there are some greats. But, I’d advise you to check out the likes of Funny Games, Eden Lake before Red Dot. The conclusion of the film doesn’t feel earned or shocking. I wasn’t at the edge of my seat and rooting for the good guys to make it out alive. The is exposition near the end that comes out of nowhere creating confusion, like a gunshot in a dark night. Red Dot feels like it needed to have us rooting for the good guys more and scared for their lives. As it was it left me bored stiff.