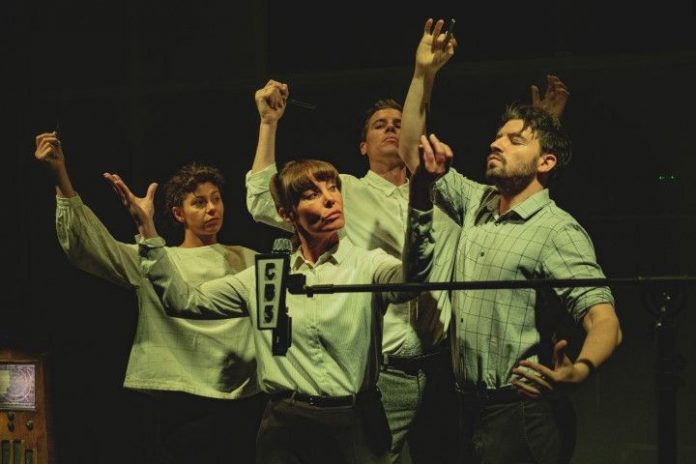 The War Of The Worlds

But we did believe. We believed that Martians landed in New Jersey. We believed a water tower was an alien war machine. We believed a man walked on the moon. Now we’ve come to believe everything the internet tells us and the end of the world is being broadcast live…

What’s better than having Orson Welles on stage? Having four of them and each with their own pipe!

That’s where we begin. The four performers, crowded around an old studio microphone, together reenacting the opening lines of the US radio drama The War Of The Worlds.

We continue into the original broadcast, treated to movement and imagery which goes to illustrate the imagination of Welles as he performed the hour-long radio play all those years ago. What wasn’t known at the time, was just how it would affect the listeners and the wider US public. The four Welles(es) recount his testimony in the aftermath, complete with total lack of modesty, at how convincing his flawless performance must have been.

How could someone believe such nonsense?

It’s a well-known and well documented moment in time. The ramifications of which are often explained away with how a 1930’s society was less informed with the only medium other than newspapers being radio. People were much more easily tricked and as a result, gullible by today’s standards. A twenty-first century audience couldn’t be so easily manipulated. Or could it?

This is the main focus for the Rhum + Clay Theatre Company production and boy does it make you think! Everything changes and yet seemingly, nothing does. Continuing on, we explore the world of 2016 America and the run-up to the Presidential election. The journey we take is one of fake news, satirical blog posts and podcasts. A much less clear society than the one in the 30’s. Who do we believe? How can you tell fact from fiction? You think you know. You couldn’t be fooled, but could you?

Benjamin Grant’s sound design helps us to meander this journey, showing us just how easily things can seem real. The inclusion of the original broadcast, intertwined with the lighting design of Nick Flintoff and Pete Maxey help to turn this seemingly blank space into the plethora of spaces we visit along the way.

This is a very slick performance and as such, runs seamlessly with the performers taking on a number of roles each to tell the story. Tableaus are repeated later in the show with much more understanding the second time around. The mystery of a fictional family and how the effects of that fateful October night over 70 years previous can still be felt today. Believable. Plausible. Probable, even. It works as both entertainment and as a warning. Radio no longer has the power it once had. It’s been replaced with something much more effective and divisive. Careful what you read. Take care in what you believe.

An age-old story, but one that is more appropriate than ever. Will we ever learn? Well, it depends on your source of information, doesn’t it!?

The War Of The Worlds Further Links

The War Of The Worlds runs at the Everyman Theatre until Saturday 23 October. So, to purchase tickets, please click here.

Did you see The War Of The Worlds? Let us know by leaving a comment below!