So, this show sees Steve Coogan step into Alan Partridge’s shoes once again. Now, Partridge himself is famous for many things: a graveyard shift radio show, a dead-on-arrival autobiography and an increasingly-disastrous co-host gig. But Partridge the character is also able to thrive on everything from the small screen to the big screen. Yet there was still intrigue as to how this timeless persona would translate to the stage. He’s not a comedian as such, but rather a comedy character. Therefore, I wasn’t sure what to expect; only that it would likely be very memorable.

And that it was. For Partridge was here to discuss Stratagem; namely, his strategy to become a gem. Like him, of course! Along the way, we get a mix of motivational speaking, anecdotes, time travelling, interviewing, dancing and singing. We also get a glimpse into how his mind works, and how his delusional nature almost always spoils his plans. As was the case here, when he finally snaps near the end and discusses what a sham Stratagem actually is. But most of all, he entertains, with the large Liverpool crowd responding to almost everything that he said and did.

Now, to me, this is a character for whom you need an acquired taste. It took me a long time to truly “get” Partridge. But once I did, I realised what a great comic creation this man is. Because as noted, he can adapt to any medium and any situation. Here, he handled almost everything possible and merged everything together into one packed show. He even had time to check in on his home security while trying to avoid further offending his neighbours. And given his often-selfish attitude, it’s not a surprise that he would continuously, and obliviously, offend those around him. This ranged from endorsing P&O Cruises despite their recent scandal to emphasising that he certainly wouldn’t live in Liverpool.

But that’s the beauty of the character more than anything. He can say and do virtually anything he wants, and the worse he acts, the funnier he gets. Furthermore, he can take mundane or negative situations and turn those into backdrops for hilarious jokes. Witness his accidental endorsement of a very controversial political figure to his deadpan reaction to a historical tragedy. Along the way, we meet characters old and new, and we get tons of unforgettable and often-clever one-liners.

This show was a treat to watch for any fans of Norwich’s favourite (or is that least favourite?) son. The fact that his humour still works decades on from Alan’s on-screen debut speaks volumes. And while Stratagem doesn’t work out for Partridge, there’s no doubt that he’ll pop up again in the future. For now, though, if you attend this show, just sit back and enjoy a classic comedy creation simply being himself. A-HA! 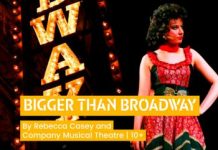