Our latest comedy review is for Sian Davies About Time at Liverpool‘s Unity Theatre. The show took place on Saturday 24th July. Let’s take a look at Sian Davies – About Time!

About Time is the debut hour of stand-up for the winner of Best Debut Show at Leicester Comedy Festival 2020. Now, growing up is hard, though most people can manage it. However, it would take Sian until the age of 27 to grow up. Oh, and everyone was in agreement that it was about time. As a comedy club regular and a frequent award winner, Davies would quickly make her name on the laughter circuit. Furthermore, since 2018 Sian would be the producer, director and star of five successful Edinburgh Fringe compilation shows.

About Time is a one-woman show about Davies’s path to ‘Growing Up’. Belated, yet forced. Timely, yet unwanted.

She’s clearly at home on stage. As if she’s as comfortable standing there as she would be in a big armchair complete with footrest, blanket and snacks. Maybe more so. She knows her craft, she knows how to tell a story and boy does she tell it. Switching gears as quickly as an F1 driver, we’re led through the early adulthood of Davies. A time Davies’s self-proclaimed d**khead-self finds more d**kheads to go out and do d**khead things with.

‘Well, you find your people, don’t you?’, Davies says to an amused crowd, all in agreement.

Uncaring, but not in a nasty way, they go out and do what they want. ‘Free Food Fridays’ and day drinking. Backpacking and the discovery of the infamous East-Asian ‘bum-gun’. Indian train journeys, IBS and questionable pints on the bar.

We’re in hysterics as Davies presents a self-deprecating tale of this chaotic, ‘life-enhancing time in her life. She’s always the butt of the joke and we love her more for it. Her now mid-thirties aches and pains, her embodiment of her mother as she ages, her incredulity how ‘…the worst thing about being a lesbian nowadays is that no one cares!’.

And then the gear changes.

The switch from playtime to serious, adult life is abrupt in its design. An accurate portrayal of how it was the first time around when Davies experienced it. ‘It doesn’t always come when you’re ready for it.’ I said this was a ‘one-woman show’ rather than a straight stand-up as she’s playing for more than just laughs. Granted, there are many, but there’s a message here. There are hints of ‘I, Daniel Blake’ and Jimmy McGovern throughout this. How could there not be? This is a Liverpool girl. One with a socialist head and a community heart. A woman who knows the struggles of the working classes with the downright failings of ‘the system’.

The switch isn’t just in the content, but the delivery. A Jekyll & Hyde-esque feel as we go from the carefree, conversational meandering into a zeroed in, targeted delivery. There’s no longer that in-joke with the front row that we all share, the banter with the BSL interpreter, Ben (who is a legend in his own right), or the snicker when we realise which pint glass she’s lifted to her lips. This is the time to listen and understand. This is a show we should ALL listen to. And understand.

Go for the laugh, but you’ll stay for the reality. The only thing missing tonight was a soapbox and yet ‘About Time’ is Davies’s. It’s two shows for the price of one and yet throughout it all, we see how this proud comedian and writer sees the world. Sees the injustice and the ‘if you don’t laugh, you’ll cry’ contradictions of a system that was allegedly designed to help the most vulnerable and needy.

To find out more information about Sian Davies, click here.

Have you seen About Time? Let us know by leaving a comment below! 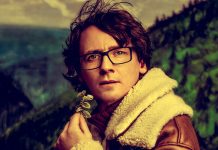