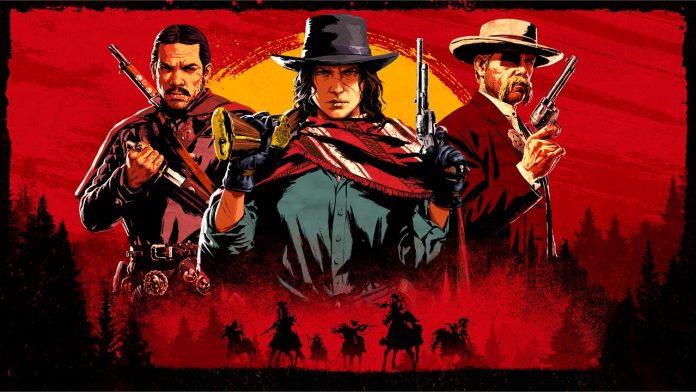 Red Dead Online launched as a standalone game last December. At first it was available at a heavily discounted price of £4.99. But as of this month is only available for the full price of £17.99. Last week Rockstar released three new missions, delivered to your character via telegram. Their hope, I assume, is to show that they haven’t given up on the game, despite seemingly focussing more on its older sibling Grand Theft Auto Online. I’m going to break down some of the best and worst features of Red Dead Online. After two years of activity is Red Dead Redemption 2’s multiplayer component worth its weight in gold or is it still firing blanks?

Obviously, the greatest thing the game has going for it is that it is still Red Dead Redemption 2. The gameplay. The graphics. The world. They’re all excellent. Sure, the character might move a bit sluggishly. Sure, you might accidentally choke a bystander instead of mounting your horse. But overall, the game is still one of the finest ever made and the gameplay is as fun and as satisfying as ever.

There’s a lot of options when it comes to dressing your personal digital cowboy buddy. More options, in fact, than are available in the single player game. As Rockstar has continued its much-maligned practice of adding new content to their online modes but not the single player modes. Not only are clothes and hats available in wide and varied styles, but so too are rings, eyepatches, weapon equipment as well as horse tack and even wagon paint. None of this stuff improves gameplay at all (except saddles and stirrups for your horse). But if playing online has taught me anything, it’s that nobody is happier than when they get their character to look just right.

Red Dead Online contains its own story mode, Land of opportunities. These are 15 missions (including the introductory mission), all with full motion captured and voiced cutscenes. Eight of which are locked behind either positive or negative character honour requirements, four for either honour. These missions can be played with 2- 4 players. The Bootlegger role also contains its 5 of its own story missions, with cutscenes. None of the missions are especially complicated. Usually, go here shoot that. But it’s fun to play Red Dead co-operatively, with a greater objective than just trying to shoot your friend with a dynamite arrow.

The frontier roles available make up the main bulk of what Red Dead Online is. So far there are five roles: The Bounty Hunter, The Trader, The Collector, The Moonshiner and the Naturalist. Each role has 20 ranks of unlockables, from role specific outfits to new horses. The Bounty Hunter received an upgrade with the release of RDO as a standalone game, with an extra 10 ranks. These roles are going to be your main source of income and are really the only thing the generates an ambient open world gameplay experience.

The number one thing that will turn you away from this game is the grind. All the good stuff online is locked behind gold, the premium currency. Even the roles each cost 25 gold to unlock. Gold is available through mission completion or daily challenges. But recently daily challenges were nerfed. It used to be after completing a 28-day streak you would continue to receive your 4th week bonuses as long as you keep up your streak. But now your streak will reset. Effectively neutering the ability to earn gold. So, before you can access the bulk of the content in the game you have to put in a significant amount of time, doing easy Stranger missions, doing tedious daily challenges or replaying the story missions over and over.

Now these are both good and bad, but I feel the bad outweighs the good here. First, they’re expensive. The first 2 Outlaw passes both cost 35 gold and the previous 2 cost 40 gold. The Halloween pass cost 20 gold, but unlike all other passes you didn’t get your gold back through unlocking ranks of the pass.The next Outlaw pass will again cost 35 gold and again won’t contain the 35 gold you spent to unlock it. A lot of the unlockables in the passes are customisations you will probably never wear or emotes you will never use. “So don’t buy it!” You’d probably say, but occasionally they do include some pretty game-changing features. For example, Outlaw Pass 4 contains multiple satchel upgrades, allowing you to carry more ammo etc. But, more importantly, it includes the ability to fast travel from your wilderness camp (if you’ve purchased the wilderness camp through the Naturalist role). Which is a significant feature, and very frustrating to miss out on that ability forever if you can’t afford the gold buy-in. Or even just start playing the game after the pass has expired.

What content updates? Well, exactly. Red Dead online has been abysmally slow with it’s content updates. All the roles so far have been released within one year. With The bounty Hunter upgrade that came out a couple months ago it’s easy to expect an upgrade for each role. But when? Who knows. Because of Rockstar’s notoriously poor public relations we don’t really have any idea what their plan is for Red Dead Online. I expect CoVId is perhaps the cause of some more recent slowdown, it’s hard to get actors to record dialogue and motion capture cutscenes. But it’s difficult to tell because Rockstar has never been very open with their roadmaps. We just have to wait and see. Either way, the content we’re getting has been released at far too slow of a pace to create a satisfying experience.

Red Dead Online is a lot of things, but it could also be so much more. At the minute it mostly feels like it’s just coasting on its association to the single player game. It’s certainly fun if you can get a group of friends together to play for a couple hours, but you won’t feel like you’ve made much progress at all. And forget about playing the VS modes until you’re a much higher rank. Since your free roam weapons, horse and ability cards factor into the VS mode you will very quickly be outmatched and just find the whole experience frustrating and unrewarding. Also, Rockstars conceited effort to reduce your ability to earn gold, likely in a manipulative tactic to get you to buy gold with real-world cash, just makes the grind all that much worse.

Last week Rockstar released 3 new missions, something that would usually be considered good news. Each mission is a single player mission. They don’t have any narrative to them and are relatively short. A lot of these decisions feel out of place, especially in an online multiplayer game focussed on forming possies with your friends. In the end they don’t feel like anything more than the free roam stranger mission with a couple of scripted elements. If this is the quality we can expect from Rockstar for RDO in 2021 then it’s not a positive outlook.

The simple fact is most people are still waiting to be an outlaw online. All the roles revolve around careers and life in the old west. Only the moonshiner has you explicitely playing a criminal. And while they’re good, the roles don’t encapsulate the satisfying experience you expect out of a western-based action game. Where’s the bank robbing? The train hijackings? The holdups and the showdowns with the law? These kind of things should have been implemented a long time ago. As it stands we have no idea whether these features will ever appear.