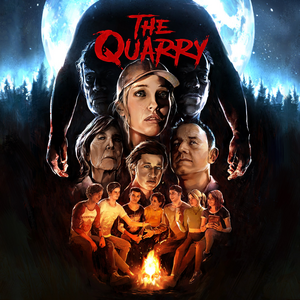 The Quarry proves homage to all the great monster movies of the 80s. With a return to form for Supermassive it becomes a trope-filled horror experience with enough blood to keep anyone happy. What else does the game do that makes the 80s-themed creature feature live up to its predecessor’s glory? Read my review to find out.

Spoilers for both The Quarry and Until Dawn.

The Quarry is set in Hackett’s Summer Camp. The player controls several young camp counsellors who’ve just finished working for the camp. Once the sun goes down things get weird. Soon they must survive a blood-filled night of horror and gore while dealing with ghosts, werewolves and the most horrifying of all, teenage romance drama.

STORY OF THE QUARRY

One thing I was very curious about was what the story was going to be. With the story of Until Dawn being masterfully crafted and the Dark Pictures anthology not being as good, I had my worries about this. There was also reason to worry with how short notice the announcement of the game was, only being announced in March and being released in June.

To my surprise, the story was decently put together. As the game progresses it presents a decent mystery for the players to unfold and discover. In the first playthrough by the end, you don’t know if you’ve genuinely made the right choice or not. It warrants a lot of playthroughs and experimentation to get the different endings.

Unlike its predecessor, this one doesn’t hold back in showing the enemies early. With Until Dawn, the wendigos were shown fully in chapter 7. In the Quarry, they show up in chapter 3. This choice helps the story as they can give more time to the characters and the mystery behind them. It’s easy to get invested in the history between the Hackett family and the mysterious freakshow fortune teller, Eliza.

All the characters work well together, even though some of the characters are unlikeable in the beginning they become far more likeable towards the end of the game. Ryan, Dylan and Kaitlyn are the three stand-out characters. They’re the perfect combination of being smart and dumb at the same time. There’s even a nice little romance you can form between the other character when you play as Ryan. It’s a bisexual route done well and is some nice casual LGBT rep. By the end I wanted all of them to survive the night.

GAMEPLAY OF THE QUARRY

The gameplay follows the same formatting as Supermassive’s previous games. With a mixture of finding clues, QTE’s and choice making it falls into comfortable familiarity for previous players. Though some elements are familiar they switch up some of these elements.

A neat new feature that they introduced was the death rewind feature, fitting with its VHS aesthetic. This allows the player to rewind a death if they accidentally make a choice which kills a character. They give you three chances to rewind. I ended up needing to use it twice. In some regards, it feels a bit too convenient to have as it may take away the challenge of keeping them alive.

Speaking of challenges, Until Dawn created tension with the ‘Don’t move’ mechanic. It utilised the PS4 controller, making the player stay as still as possible. In this game they put a twist on that feature. In the Quarry, it’s called the ‘Don’t breathe’ mechanic. This new mechanic essentially has you waiting for the right moment to hold and release the X button, letting your character run away, trying to avoid whatever danger you’re in. It took me a couple of tries to figure out how this mechanic worked. Once I did chases and hiding sequences became tense, as I was either hiding from hillbillies or werewolves.

There’s also the addition of movie mode. This mode essentially allows you to just watch the story unfold as a movie with a set of predetermined choices. It’s very nice for people who just want to experience the story but don’t necessarily want to put in the time and effort to play it.

Upon opening the game, it very clearly sets up a distinct 80s VHS theme. From the different filters, you can apply to the choice paths being set out like fake VHS films it goes all-in on the aesthetic. For a game that’s based on old classics this theme works incredibly well and lays it out nicely.

As for the graphics they’re as good as ever, if not improved. My own mother thought it was a live-action movie when she watched me playing it. The characters look amazingly realistic, and they show they’ve stepped up their use of motion capture.

The characters are designed well but I will say that if you’re a fan of cool monsters you’re going to be sorely disappointed. The werewolves in this game are underwhelming at best. When I first saw their designs, I assumed they were goblin creatures and not werewolves. Supermassive has proven they can use motion-capping to make effective creatures and it’s a shame they didn’t pull it off here.

I will say for what they lack in the werewolf design they make up for in the gore. The werewolves frequently explode in a cloud of blood and with an abundance of gory death methods. This will keep any horror fan as happy as a slasher in a meat factory.

The Quarry is a huge step up from the Dark Pictures Anthology and is a worthy sequel to the classic Until Dawn. It’s tense, action packed and a great game for all horror lovers. 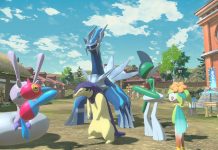