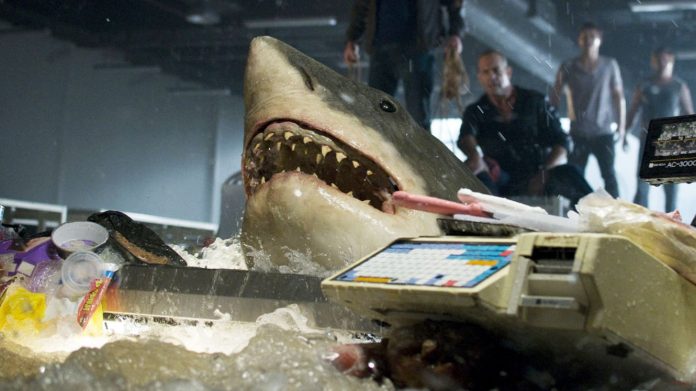 Also titled Bait 3D , Bait (Rendall, 2012) is an Australian natural horror film featuring a great white shark running amok in a flooded supermarket. I found myself remembering this film when thinking of other memorable natural horror films, I’ve watched. This one stands out for its character stories far more then the typical creature feature scenes in my opinion although with that being said the other antagonist’s ironic end is quite memorable.

The Plot of Bait

The story of Bait revolves around staff, customers, and criminals being trapped in a store as a tsunami hits the city. The resulting flood engulfs the city. Water rushes through the store and soon floods it, as panicking people try to escape the water by climbing on top of the shelfs, they notice the true dire nature of their gruesome predicament, the water brought in a GREAT WHITE SHARK! Yet things are even more dire as just as the tsunami hit, some criminals were attempting to rob the store. Bait is when an act of God interrupts a robbery, only to save you so you can become supper for the hungry sharks that just strolled into the supermarket via a tsunami expressway.

The shark itself doesn’t do anything quite memorable to stand out amongst the vast array of Jaws clones. However, saying that the true draw of Bait is the actual plot. Breaking from the norm, which is usually ignored in creature features in favor of having more liberty to just do whatever they want with the titular creature. In Bait the story and the people hold up on their own. I was invested in the personal stories as much as I was excited for the next glimpse of the shark. Don’t get me wrong the is still a good helping of cliché creature feature moments, such as a young couple being attacked whilst being intimate with one another. However, I found myself invested in the criminals and their dynamic with the rest of the survivors.

If I had to rank the Australian offering, I wouldn’t place it in my top 3. Jaws, Deep Blue Sea, and The Meg all outclass every aspect of this film. I will say however it does provide some shock value like the aforementioned shark creature features. Yet it doesn’t do anything too memorable with its unique premise. Although Bait must be given at least some credit for deviating from the cliché topics the sub-genre is flooded with. That being said I would have to rank Bait higher than most other shark films I’ve watched, at least ones I can recall at the time of writing as the less memorable ones tend to blend together. With the film ranking 7th on my all-time favorite shark films. Shallows, 47 Meters Down, and Jaws 2 fill in gaps in the rankings.

Bait is available to buy/rent on Amazon Prime and YouTube.

Interested in reading Writebase writers’ opinions on other movies mentioned in this article? Check them out here: Deep Blue Sea, Jaws, and The Meg