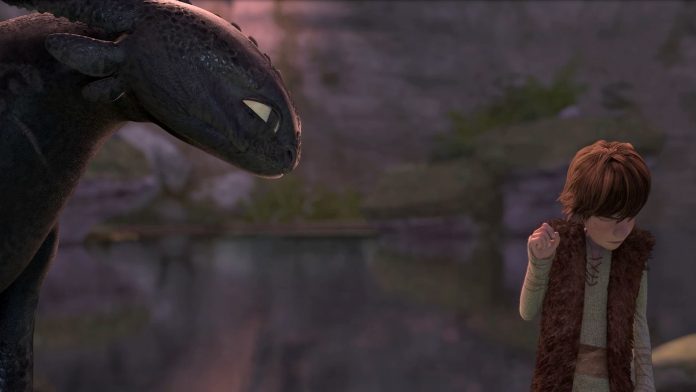 How to Train Your Dragon (DeBlois & Sanders, 2010) film series took the world by storm. Being adapted from the extremely successful series of children’s novels by author Cressida Cowell. I personally hold a great admiration to the media series. Having watched the trilogy of movies and the spin-off Netflix show DreamWorks Dragons (2012-2018) I thought it provide a nice break from the more mature themed monster films I’ve been covering.

Plot of How to Train Your Dragon

The story of How to Train Your Dragon revolves around the small village of Vikings that live on the island of Berk. Here we are introduced to the Chieftain of Berk Stoic the Vast (Gerard Butler) and his son Hiccup (Jay Baruchel) as well as the long history of Vikings and dragons. With many dragons attacking Viking ships and settlements the Vikings had grown a great distrust and distain for the species, often hunting them. Hiccup however comes across and injured Night Fury and bonds with the dragon as he heals. Hiccup’s struggle of trying desperately to change his stubborn father’s ideals are finally successful after the climatic battle when he awakens to see his people living side by side with the dragons as equals.

Appeal of How to Train Your Dragon

The starring character Hiccup is one that is very easy to relate to. He wishes to do right by his farther but knows the current ways need to change for the tribe to survive. Hiccup feels isolated as he doesn’t quiet fit in with the other Viking’s kids. He’s not very athletic, strong, or possess any stereotypical feature or attribute one would think of a Viking possessing. What differs Hiccup from the other Vikings is his admiration for dragons which grows after he encounters the injured Toothless. The bond the two share is one pet owners can strongly relate to, the bond between a person and their animal. It’s heart-warming to see the introduction of Toothless into Hiccup’s life give him enough confidence to stand up for his own values. In doing so winning over his farther and slowly starting to earn the respect of him and their fellow people.

Though Provoking How to Train Your Dragon

The clash of ideas from Stoic and his son Hiccup are very enticing to the viewer. The are similarities between the two yet probably due to Hiccup not being able to relay on brute strength like his Dad, rather has to deploy cunning thinking and use his intellect to devise the best plan of action. Where his Dad would charge in at any threat, choosing to use his brute force to keep any possible threat away from his people.

Summary of How to Train Your Dragon

You can see the credibility in both ideals. Stoic knows first hand how dragons can kill Vikings and wipe-out whole villages, yet Hiccup has proven the dragons will reciprocate kindness after initially proving somewhat hostile. To summarize How to Train Your Dragon is an amazing start to one of the best trilogies in film industry. It’s a story filled with heart, morals, family, and the ability to adapt. Whilst at the same time being packed with spectacular visuals, accompanied by a truly masterful score.

How to Train Your Dragon is available on Netflix.