As you may be able to guess, I don’t usually go for conventional horrors when picking movies to watch. I’ve always preferred my nature horrors, my creature features etc. Yet I was pleasantly blown away and entertained my butt off by the little Netflix film, Spree (Kotlyarenko, 2020). My girlfriend put it on to get another fix of one of her favorite actors from Stranger Things but we were both glued to the screen, so much so I put my controller down and stopped playing my Tomb Raider.

The Plot of Spree

The plot of Spree is quite simple it follows this young man called Kurt (Joe Keery). Kurt’s been trying desperately to build a following via social media, he wishes to be an influencer. After 10 years of trying, he has gotten little to nowhere achieving his goal. Left confused and desperate Kurt decides to start working for Spree a ride share service with the aim of killing people on stream in order to get famous.  To his frustration someone he used to babysit has a massive following and Kurt asks him for a shout out. Unfortunately, Bobby thinks the killings are fake only causing to provoke the disillusioned Kurt to proper even further into insanity. The really messed up thing, people start being attracted to him and entranced by him by the point he becomes some what accustomed to his premise, his “lesson”.

Something I weirdly found myself relating to the dynamic of him and his viewers. It reminded me of my streaming days, back when I wasn’t swamped with so much work. The film also creepily captures the social commentary of people being weirdly wired to take directions of followers as the really surprising ending shows you. Unfortunately, the ending and the film is so good, I don’t wish to spoil any of the entrancing film. It does make you wonder why people laud after serial killers, yet this film eerily shows you how that can happen. How a loser can turn into a “icon” by killing. Something is certain however Joe Keery maybe one of the best upcoming actors of the 21st century. I honestly can’t wait to see where his career goes from here and I may just finally try and give Stranger Things just one last go.

We are also witnessed to the unbearable life of woman, and the amount and volume of torment they receive. From friends to just random encounters it truly is saddening to think about the truth that lies behind the inspiration of those scenes. Spree does however seem to be aware of how far the film can actually go. With a lot of the time the film teasing and looking like its going a certain direction (a much darker direction) it then changes last second and goes with a tamer approach. Nevertheless, this film is one you will not forget anytime soon.

Spree is available to watch on Netflix. 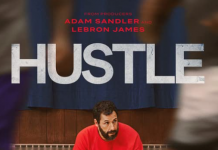