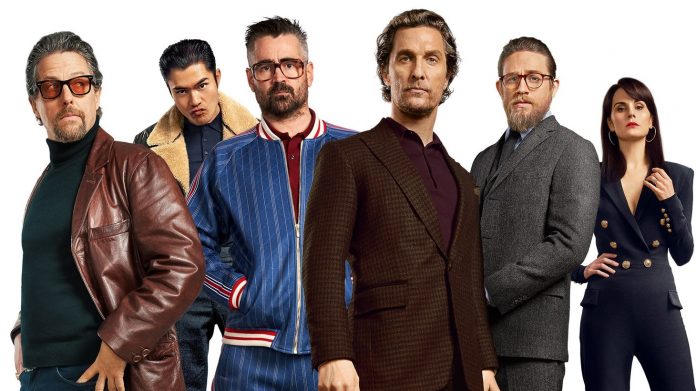 With April being ram packed with Uni deadlines, I desperately needed a break from my academic work. Studying Star Wars for my Dissertation and doing a group surrealism project, I fancied a change in genre, I wanted some ACTION! What better person to go to than Guy Ritchie to entertain me and satisfy my craving for action. Having watched Snatch a few weeks before I decided to watch one of his newer films – The Gentlemen.

The Gentlemen is framed in the form of sly reporter Fletcher (Hugh Grant) telling the story through information and evidence he has gathered to Raymond (Charlie Hunnam). In an attempt to extort £20 million from his boss Mickey (Matthew McConaughey) or he will go to a studio to sell the rights to a script he has written based on the story entitled ‘Bush’. The Story depicts Mickey trying to sell his weed business to American businessman Matthew Berger for the sum of £400 million. However, some amateur MMA fighters are leaked the location of one of Mickey’s grow sites. They raid the farm and upload a video using the fight for footage, going by the YouTube name ‘The Toddlers’.

This kickstarts a bunch of problems for Mickey’s proposed sale. What results is twists and turns, with the Toddlers getting in the way more than once. However ultimately Mickey finds out who is responsible for the damage to his business. Deciding to keep the business Mickey lets the guilty party live in exchange for compensation in the millions as well as a “pound of flesh”. The movie ends in a climatic action filled peak which I would hate to spoil any part of, more than I have already. So be sure to catch The Gentlemen on Netflix before it goes.

The movie is superbly cast. Boasting raw talent whilst being diverse, the cast of The Gentlemen all perform outstandingly well. The chemistry between all cast members is a treat to watch. The mix of tension, action, and comedy is perfected by Guy Richie. With each being present in every scene of the film without ever taking away from the experience. Every character has personality and depth. The world that the Gentlemen is set in feels very real due to the strength of the characters that inhabit it.  Personal favorites of mine are Mickey (Matthew McConaughey), Rosalind (Michelle Dockery), Fletcher (Hugh Grant), Raymond (Charlie Hunnam) , The Coach (Colin Farrell) and Bunny (Chidi Ajufo). I would have however liked to see more of Rosalind and the other minor characters of Mickey’s organization.

In summary The Gentlemen is a knockout, gritty, action film like any other Guy Ritchie film. As with utilizing Brad Pitt in Snatch, he plays the same troupe here casting an American in the mostly British cast and again produces gold. Matthew McConaughey is simply outstanding in the film. The subtly he brings to the character with both slight differences in the tone of his voice and mannerisms, pays off brilliantly. The framing device for the movie is superb, with the sleezy Fletcher telling the story as it plays out it immerses you deeper into the world of The Gentlemen. Whilst enabling him to have some fun and gift the audience to more actions scenes simply by telling the story wrong then correcting himself. The film is simply amazing, and I hope a sequel is soon in development.

You can watch The Gentlemen here on Netflix.