The Golden Globes was held recently and the category I love the most is animation. Encanto rightfully deserved to win this year but something bothered me about the other nominations. What bothered me exactly? They chose to nominate Raya and the Last Dragon over The Mitchells vs the Machines. I was baffled as to how such a uniquely animated film could be beaten by one of Disney’s worst written modern animations. If the Globes won’t honour this amazingly artistic film, then I will. Spoilers ahead.

Katie Mitchell is a 19-year-old filmmaker who’s about to make the journey to her dream film school. Her father, Rick, is hesitant about her pursuing her dream and the two are on bad terms. In order to fix the relationship, Rick takes the whole family on a road trip. Unfortunately, the robot apocalypse breaks out and they’re the last humans to evade capture. Now it’s up to the Mitchells to save the world while also mending their own bonds.

When the Mitchells vs the machines advert first popped up, I wasn’t sure what to think. I’m not often one for films that involves robots, but I am a sucker for animation. Sony can be hit or miss but I gave it chance. I’m so glad I did. Who knew the robot apocalypse could be so much fun? It was probably the film that made me burst out laughing the most.

Even if you don’t understand the technology-themed jokes there’s still enough regular jokes to make you burst out laughing. The best scene for comedy is by far the Mall scene. From the Roombas falling down the escalator to the giant eldritch Furby, it’s impossible not to laugh at least one joke during it.

My other biggest thought was how much I loved the main character, Katie Mitchell. As a university film student, Katie’s character hit me on a personal level and resonated with me. Personal connection aside, she’s created with the young audience in mind. She feels people don’t understand her and she tries her hardest to pursue her dream of a non-traditional career. Being raised with technology, I think most young people watching will relate to her. She’s fun and quirky without being the stereotyped typed quirky female protagonist.

Also on a side note, I adore how they did the LGBT+ rep in this. I think to any queer person watching they could guess simply from Katie’s character design that she was gay, but they outright say that she has a girlfriend in the end. Disney could take a lesson from this film on how to do LGBT+ rep properly. It’s not a big part of the movie but I appreciate it nonetheless.

As a film student, I could talk about this script for hours. From the same team that wrote Gravity Falls and Lego Movie, they wrote another smash hit. Their talent is in appealing to all age groups, and they know how to target a specific audience. This film is an expert at balancing the serious and the silly.

Another element that makes it impressive is its ability to avoid cliches and improve the ones it uses. Rick is a perfect example of this. He could have so easily been the typical “My daughter is dumb, I’m right.” kind of character but the film is smarter than that. There’s no doubt he loves Katie but he just doesn’t know how to communicate with her. There is an immense satisfaction watching the two work through a karaoke inspired climax. Katie learns how much her dad cares and Rick learns to use a computer for Katie.

Speaking of technology, I adore the way this film discusses technology. It’s rational with its message saying that the villain isn’t the technology itself but rather who’s in control of it. It’s refreshing it is to see a kid’s movie that doesn’t go down the route of ‘Everything was better before smartphones’. The writers were really with the times on this one and it shows.

I just hope in the future that the memes included don’t date the film. They work well now as most people understand the references but I’m not sure if it’ll still hold up in 10 years time. We’ll have to wait and see.

The Mitchells vs the Machines got the ‘Into the Spiderverse’ treatment with its animation. The use of Katie’s art style in the animation makes it distinct from other animations while giving it a stronger tie to the story. It’s made with the intention of being watched like Katie’s films and it’s really effective. The characters bounce during the action with every colour in the rainbow. It grabs the attention of anyone watching and makes it impossible to look away.

Each character design is unique and memorable. Even the comic relief robots have funny marker drawn faces that make them different from the rest. The voice actors nailed it with this film. The character’s voice matches up with the design, which is an added bonus.

The Mitchells vs the Machines is a non-stop action-comedy. With equal laughs and heart to make it one of the best-animated films of 2021. Overall rating 9/10.

What do you think of the Mitchell’s vs the Machines? Comment below your thoughts on the movie. 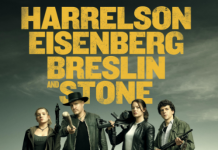