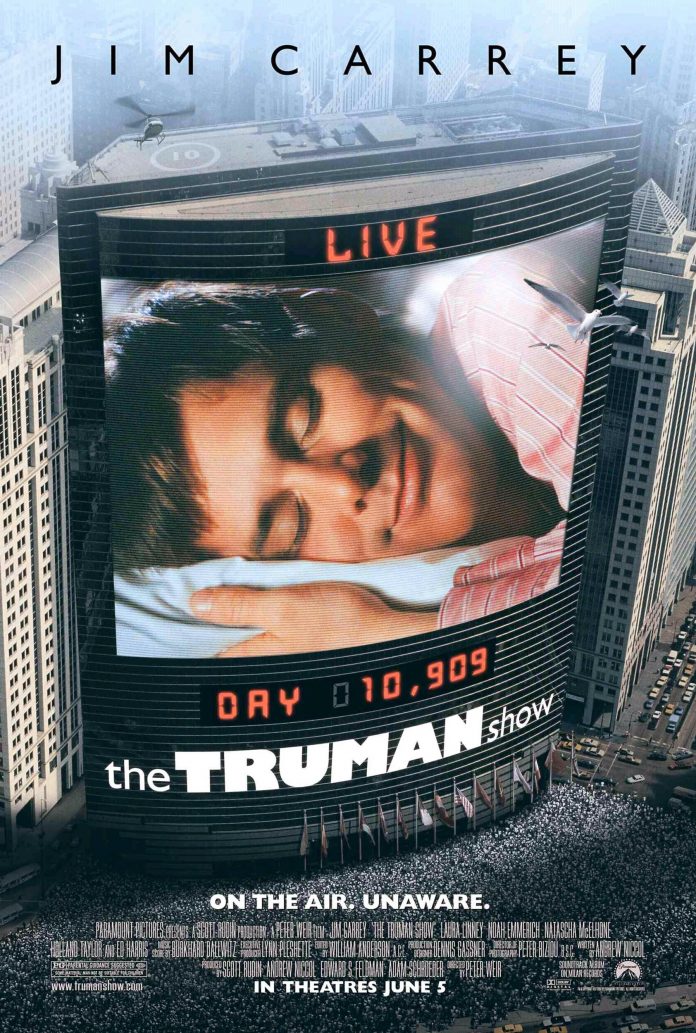 Having still needing to watch Sonic the Hedgehog 2, I find myself anxiously anticipating Jim Carrey’s performance as Dr. Robotnik. To tie myself over for now I resorted to watching what may just be Carrey’s best performance to date, Truman Burbank in The Truman Show (Weir, 1998).

Plot of The Truman Show

The plot is fairly straight forward and will be left vague as I highly recommend anyone who hasn’t to urgently watch this movie. The story follows Truman Burbank who goes about his normal life, we the viewer are then enlightened to the perfectly orchestrated, coordinated, and choreographed performance that makes up Truman’s “real” life. Which is then broadcasted to televisions worldwide.  Including the actress that is his wife, meaning his whole life is nothing but cast members performing roles, his life has no real connections. Well almost no real connections, we are shown Truman in college and how he intended to fall in love with now wife Meryl (Laura Linney) yet fell deeply for Sylvia (an extra). Sylvia (Natascha McElhone) was quickly removed from the show before she could divulge the nature of Truman’s unique predicament.

The Ending of The Truman Show

As the show approaches its 30th anniversary Truman starts discovering unusual events such as a spotlight falling out of the sky. This causes Truman to question his life, upon doing so he realizes that the city somehow revolves around him. This escalates to the point he confronts his wife (Meryl) to the point she breaks character and is ultimately removed from the show. With the confirmation he needed Truman is now determined to escape his personal hell. The show’s producers try to keep him tied to the city by reintroducing his Dad (Brian Delate). Yet this fails and Truman escapes the show through a staircase built into the sky, with the whole world watching him as he finally lives his own life.

Summary of The Truman Show

The entire premise of the story of The Truman Show is one that is ripe with intrigue. The story continues to draw the viewer into the mysterious aroma that covers the city built specifically for Truman. Your left on the edge of your seat hoping that he gets his good ending. I myself will have to admit I have never been so invested into a movie character before. Yet I found myself attached to Truman in a way, every emotion he felt, I felt. Jim Carrey is truly a master of his craft, and his unique eccentricities perfect the character of Truman. I urge you to watch this masterful character driven heart-warming story, you will not be disappointed.

You can purchase The Truman Show on Amazon Prime and YouTube.

Be sure to check out my other reviews here on Writebase: Jurassic Park, Evan Almighty, Tremors, Jaws 3-D, Monster Hunter, and more.