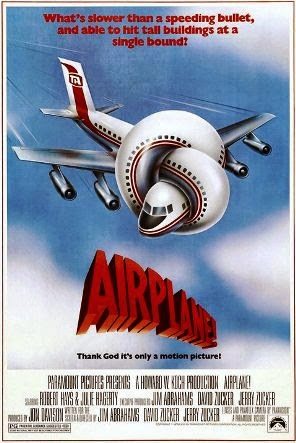 “Surely, you can’t be serious.”

“I am serious. And don’t call me Shirley.”

If ever a piece of dialogue embodied a film, it’s this classic exchange from the movie Airplane! For whilst the plot centres around the possibility of an aeroplane crashing, and one’s desperate attempts to prevent such a tragedy from happening, the frequent one-liners and ridiculous yet hilarious visual jokes are so funny that the tone of the movie is never anything less than slapstick comedy (fans of the Naked Gun movies, including me, will not be surprised once viewing this film that the Zucker brothers were also responsible for the aforementioned trilogy).

Ted Striker, played here by Robert Hayes, used to be a fighter pilot. Unfortunately, after a bad experience which traumatised him, he now has a fear of flying. But he happens to be a passenger on this flight, which becomes uncomfortable when he learns that one of the air hostesses is Elaine Dickinson (Julie Hagerty), who used to be his girlfriend. They catch up on old times, accompanied by flashback clips (the homage to Saturday Night Fever, a recent film at the time as it was released in 1978, is great), but it becomes clear that past problems remain an issue for both, and their interaction becomes awkward for each as the film rolls on despite Ted’s hopes to rekindle their romance.

However, there is a greater problem on the horizon. The menu for passengers consists of only two options, fish and steak, but the fish has given food poisoning to everybody who has eaten it including, worryingly, the pilot and his co-pilots. The illness is identified by Dr. Rumack, played by my favourite comic actor Leslie Neilsen, who humorously says that he avoided the food problem himself by eating lasagna. Still, whilst the problem is identified, it hasn’t been solved: the plane is going to crash unless someone else takes control at the cockpit.

But whilst an inflatable autopilot named “Otto” helps, the only passenger with experience of flying planes is Ted Striker, who as noted is nervous enough due to a fear of flying. At this point, though, he’s the only hope that everyone has, causing people to panic (including the Statue Of Liberty, who puts her head in her hands at the prospect). Despite having never flown an aircraft of this nature, he gives it a shot, but nerves get the best of him, especially when having to exchange instructions with Rex Kramer (Robert Stack), previously Ted’s commanding officer. Add to that his relationship problems with Elaine, and the forecast seems bleak. However, a timely pep talk by Rumack convinces Ted that he has what it takes to finish the job and land everybody safely – but is it too little, too late?

The premise is easy to follow and the side-story of an old romance slowly reforming gives the story a logical structure, but the true entertainment comes from the hundreds – and I do mean – hundreds of physical, visual and verbal gags, many of which are very, very funny, and some of which are classic movie lines. Other images are unforgettable, such as this one of Steve McKroskey (Lloyd Bridges) to the right.

I am a bit biased, but I have to say that Leslie Neilsen is brilliant here as a straight-faced doctor who comes out with some hilarious comments or is simply funny in his overall mannerisms, including a repetition of a good luck message after the situation has been resolved. In fact, this marked the first role in comedy for Neilsen, previously a serious actor (which was another spoof element), who would then go on to become famous for deadpan comedy.

Robert Hayes is very good as Ted Striker, and is believable not only in portraying the Ted character and handling the situations he encounters, but also in making the ridiculous seem genuine. For instance, if somebody says they have “a drink problem”, it’s unlikely to resemble the dilemma Ted has, but it never stops being funny despite the daftness of it. The rest of the cast are good too: Julie is very good as Elaine, and even minor characters are involved in some very amusing moments, one example being the use of the pilot phrase “Roger” when one of the co-pilots is actually called Roger.

In closing, Airplane! is the perfect spoof of a disaster movie (it particularly lampoons the 1957 film Zero Hour!). It takes a logical storyline and turns it into a comedy classic, not by making the overall plot nonsensical, but by adding a huge amount of great jokes to virtually every scene. You would probably have to watch this more than once to notice them all. And they range from the silly (Dr. Rumack’s exchanges) to the dark (such as trying to calm down passengers on a risk-surrounded flight by showing them a movie which includes a plane crashing), but they all have one thing in common: they are very funny and even the oft-repeated lines never get old. If you haven’t seen Airplane! in the past, make plans to watch it because it is an all-time great comedy film, maybe even the best comedy ever, so you will love it. Shirley.