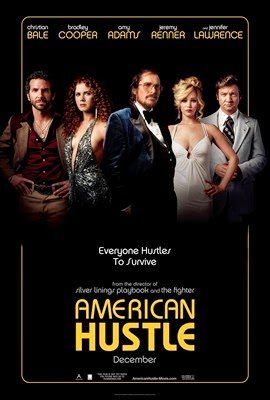 American Hustle combines a pretty strong cast (Christian Bale, Bradley Cooper, Amy Adams, Jeremy Renner and Jennifer Lawrence) for a movie that I would describe as unusual. It is part-comedy, part-drama, part-romance, with crime and violence mixed in, over the course of a long running time, and with a fair amount of confusion as it relates to the main plot-line. Still, as a whole, the movie remains an engaging experience, and one worth seeing for the powerful performances by the aforementioned stars.

We begin by learning that a relationship has been formed between two con artists in Irving Rosenfeld (Bale) and Sydney Prosser (Adams). They are rmoantically linked, although their love for each other is perhaps best exemplified by the lengths to which each is willing to go to ensure that their schemes are a success, from pretending to be English aristocrats to generally misleading potential customers to the point where you realise that their fate truly lies in the hands of the con artists. More troubling, though, is that Irving is actually married to another woman named Rosalyn Rosenfeld (Lawrence), who is mentally unstable yet has an undying love for her man.

Unlike some movies where you would believe that having two women on the scene spells trouble further down the line, Irving if anything is unapologetic: he realises as time goes on that he has made mistakes within his relationships, but he is in no hurry to try and narrow it down to one, and he feels no guilt as his primary concern is how he can make money. Rosalyn later learns the truth but, rather than immediately blowing up Sydney, she subtly gets involved, making herself indispensible yet distracting, and generally getting her revenge from the inside. This, of course, doesn’t go well with the con artists and leads to a number of confrontations as the movie goes on.

However, whilst love and romance are elements of American Hustle, its main storyline centres around the leading characters’ attempts to make money through false means. And the plot takes an intriguing twist when Irving and Sydney are caught in a loan scam by an FBI agent named Richie DiMaso (Cooper), but through a number of suggestions and allegations, it ends up that Richie actually works alongside Irving and Sydney to pull off even greater cons, to the point where some of his attempts seem so over-the-top and so difficult to pull off that even Irving has misgivings.

Unbeknownst to him, however, it soon comes to light that Richie and Sydney have fallen in love. This means that Irving is at risk of not only losing his key business partner in the event that Richie and Sydney try to cut Irving out of potential deals, meaning a loss of big money (and consider that if he moves away, Richie as an FBI agent will most likely have Irving taken to jail), but of also losing the woman he is in a relationship with behind his erratic wife’s back. In short, Irving has been conned into a situation where he now has to go along with the orders of everybody around him, because while the developments are clearly taking a toll on him, he has much more to lose by getting out. It eventually leads to one major potential deal with the Mayor of Camden, New Jersey (Renner), where the deal-making process is comprised of several parts where the different storylines and character clashes are certain to come to a head. And given what each character has to lose, and since each character is in someway playing somebody else, it is uncertain as to how this will be resolved, who if anybody will face punishment for their actions, and who if anybody will come out of the whole thing smelling like roses.

It is an unusual story, packed with different plot developments. It is never predictable, and is engaging to watch. Lawrence shines as the unstable wife whose behaviour is at times alarming, even given the obvious negative treatment she is receiving, yet remains in love with the man she married and uses her own forms of psychological manipulation to achieve some level of redemption. Describing her as a sympathetic character may be a bit of a stretch because she comes across so erratic that you are unsure whether she is someone whose side you would take, but the character is a complex one that holds your attention in all scenes where she is featured. Bale and Cooper also play their roles well and, in the case of Bale, he plays a poker face which ensures that, despite his stated intentions and what is going through his mind, you never quite know what he is thinking and what he will do, and how he will react to sudden changes in the situations that he finds himself in. Adams also does this albeit to a lesser extent.

The main problems I had with American Hustle concerned the structure of the story. It is very hard to follow what is going on, to determine who is on whose side, and to establish who deserves sympathy and who deserves scorn. I have outlined the plot above, and the way I have written it out, you will understand it more than you would if you watched the film. It isn’t a case that too much is going on, just that too many developments occur without proper exploration of the whos, whats and whys. I also felt that the running time of 138 minutes was a little too long, as the movie lost a bit of steam in the final quarter. Some scenes could have been dropped or at least shortened; a two-hour presentation would have reduced the irrelevant activity, and by streamlining the film as a whole, it perhaps could have been easier to explain the important developments and relationships, since we wouldn’t have had added unncessary elements on an already-busy storyline.

That all being said, I still enjoyed American Hustle, and so did many others, given the praise it has received and the fact that it won three BAFTAs, three Golden Globes and a Screen Actors Guild Award, as well as ten Academy Award nominations. So, whilst it is a bit hard to follow and it does drag on a bit, I think that American Hustle is a very engaging movie which will entice fans of any genre, whether it be comedy, drama, crime or suspense. It may be best to watch it and then see it again to understand everything that goes on, but if the question is whether I would recommend American Hustle, the answer is a definite yes.