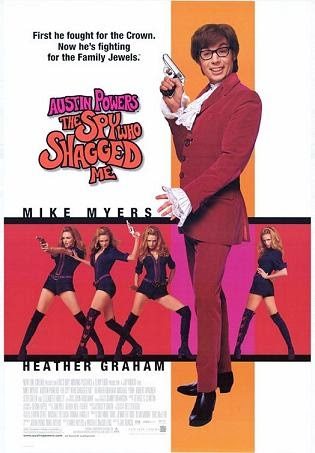 The second part of the Austin Powers trilogy, The Spy Who Shagged Me (a take-off on the name of the James Bond flick The Spy Who Loved Me), picks up where the original left one, quite literally; we return to the location where Austin Powers (Mike Myers) and his new wife Vanessa (Liz Hurley) are together, only to discover that she is an evil fembot! Austin withstands an assault and is sad at the discovery, but then cheers up when he realises that he is single again, which opens the film.

It is now 1999, and Dr. Evil (Mike Myers again) returns to Earth in hilarious fashion, as a guest on The Jerry Springer Show (which was very popular back then) to discuss his awkward relationship with his son Scott (Seth Green). This is a brilliant scene, probably the funniest of the entire trilogy. We then learn that he has plans to return to 1969, whilst Austin was frozen, to steal his mojo and thus weaken Powers’, erm, powers, but not before meeting his new sidekick, a little man who is one-eighth the size of Evil, Mini-Me (the role that made Verne Troyer famous).

Back in 1999, Powers meets one of Dr. Evil’s assistants Ivana Humpalot (Kristen Johnston) at a photo shoot, but although Ivana is assigned to kill him, instead she finds him irresistable and they have sex. But disaster strikes: as part of Dr. Evil’s, erm, evil plan, he employs a new associate of his, the hilariously-titled and humourously-large Fat B—–d (the third character played by Mike Myers in the continuation of a running joke), to visit the frozen Austin and remove his “mojo”. With Powers weakened from a villain-tackling standpoint and a sexual standpoint due to this, there is no greater incentive for him to also go back in time and defeat Evil, who is planning to destroy the world from his new lair on space (he calls the whole plot “The Alan Parsons Project”, which you may have heard of via the rock band).

In the 1960s, Austin meets a young lady who would become his new sidekick, Felicity Sh–well (Heather Graham; by the way, apologies for the dashes but, hey, this website is family-friendly). As the name suggests, she is nothing like Vanessa, and since this is Austin Powers we’re talking about, there is instant connection, but Powers concedes that without his mojo, he simply can’t bring himself to have sex with her, although he does find her to be beautiful (who wouldn’t?).

In the meantime, Evil is treating Mini-Me more like a son than he does Scott, which causes friction, but he also gets closer with the 1969 Frau (who, unlike the retro No. 2 who is played by Rob Lowe, hasn’t changed at all from the modern day). Fat B—–d is disgusting, but in a funny way. (Author’s sidenote: Somehow, my old secondary school class managed to convince the teacher to let us watch this movie in class. The scene where Fat B—–d talks about “having a crap on deck that could choke a donkey” was the point where it was turned off; that lesson was great fun. Oh, I miss doing English). Never more so than when he is naked and Felicity has to sleep with him to insert a tracking device into the mammoth man, a fact that Austin later learns and is disappointed by (the opposite to his actions in the first movie).

Austin and Felicity track him to Evil’s lair and soon all involved head to space for the climatic, daft but funny conclusion. During the credits are extra scenes with the odd revelation, so keep watching once the main feature ends.

Throughout the movie are a ton of jokes, many quite rude or gross (there are two different montages of quips about penis references), but overall they are very, very funny. There are scenes which are funny for other reasons, including the ridiculous yet amusing performance of “Just The Two Of Us” by Dr. Evil and Mini-Me. And knowing that a third movie is on the horizon, the ending is satisfying enough.

To me, this film was the peak of the Austin Powers saga. The jokes are better than in the original and the new characters are great additions, and the material is fresher than in the third movie. You do have to be into a certain type of humour to enjoy it (or, to put it another way, if you’re not into a certain type of humour, you won’t enjoy it), but assuming that you’re on board and you “get” the jokes and scenarios, you will love this movie. As stated, there is one more film in the trilogy which I will review next week, and that one is also great, but if you only plan to watch one Austin Powers movie, make it The Spy Who Shagged Me.