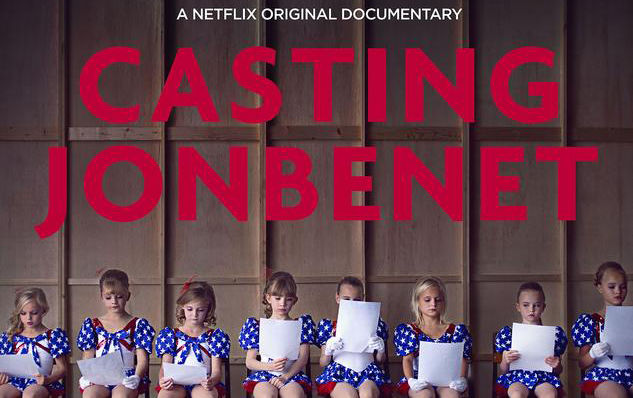 The unsolved murder of JonBenét Ramsay, on Christmas day 1996, in Boulder, Colorado has been the focus of many films, re-enactments and documentaries in the 20 years since it happened. Director Kitty Green explains she wanted to look at it from another angle; “rather than looking at who killed JonBenét Ramsay – there have been a lot of documentaries about that, we were looking at, I guess, the legacy and mythology surrounding the case. The Cultural obsession,” (Aftab, K. (2017) independent.co.uk) explained Green.

Casting JonBenét would seem, initially, to be intended for those who remember the crime. But, instead, the documentary has a very relaxed nature and doesn’t challenge the audience too strongly to attempt to be involved. It’s very entertaining to see how the crime has remained in peoples mind for so much time. And it’s interesting to see how these people still have such strong opinions on what must have happened.

Casting Jonbenét works very well in exploring how the people of Boulder remember the event. Green auditioned people from the Boulder area, for a film that would never be made, to play the roles of those involved within the case. In these interviews they talk about their memories of the murder and subsequent events and share their own opinions on what really happened to JonBenét Ramsay.

Entertainment seems to be the primary objective here; the film does not set out to try and investigate the murder, only to hear what the residents of Boulder remember about it. The story of the murder is told through the recollections of those interviewed, while never being incredibly informative about the events that occurred. The narrative jeopardy for the audience seems to be the expectant re-enactment that these people are auditioning for. Though the documentary makes no real point of creating a story, the events are mostly linear.

Interview after interview explores the actor’s memories of each successive moment of the mystery. Beginning at the curious circumstances of her kidnapping, the botched investigation and then the media circus that followed. Every now and then we see a short scene, performed by the actors, though we hear their own opinions and how it informed how they would play the role. These multiple re-enactments show the many different possible ways the event could have taken place, but never focus on any one as most likely. Every person’s viewpoint is treated with equal validity.

The documentary is very minimalistic, the interviews/auditions are presented in a 4:3 aspect ratio perhaps to give a dated, nineties feel. All footage is new for the film. No archival footage is used to inform the audience of the subject matter. No exposition from outside or inside sources knowledgeable of the murder is shown or heard. Everything we gather of the subject is told to us through re-enactment or audition. No graphics are used to identify the actors and music is used sparsely throughout. Re-enactments when used are portrayed differently by each actor and no conclusion is ever drawn to whose performance was the most accurate.

Overall, the film has a very unique style and a very unique purpose. Not to investigate a famous murder mystery, or even to inform an audience on an eerie event, but to explore how it stays in the public consciousness. It’s all about how everyone can draw so many vastly different conclusions from that information. In the end the audience is not given any solid conclusion about which events were more likely to have occurred. The film that was never to be made, that these actors were auditioning for, turns out to be a re-enactment of the many opinions of what happened the night of the murder.

Casting JonBenét was never about what happened to JonBenét Ramsay on that fateful night. It’s about what everyone thinks happened. Casting JonBenét explores more about how your own experiences will colour your opinion of such an event. Even within such a small selection of the population as the neighbours of the Ramsays from Boulder, Colorado. It’s a fascinating look into how our own stories get wrapped up in our perception of others. And, how to some, even the most ridiculous scenario is just as valid as any other.