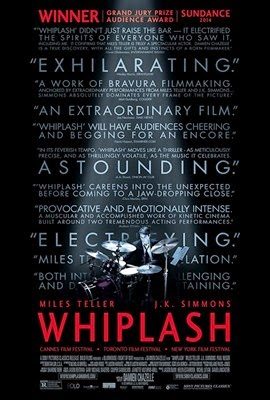 There are certain films that you make specific plans to see, and then there are those which you don’t. Whiplash is one of those that happened not unexpectedly, but by chance. You see, me and a friend attended a special screening of an upcoming film where the identity of the movie would only be known when it begun. And when I saw the name “Whiplash” appear on-screen, I was unsure what to expect. It sounded like a thriller. But it could have been a drama. Or would it be something completely different? And regardless of what genre it was, would it be any good?

The first question is hard to answer. It is a drama, but it has elements of a thriller, and it also has aspects which make it a comedy. And the second question? Well, it is good. Very, very good.

It starts off quite slow as we are introduced to Andrew Neiman (Miles Teller), a student jazz drummer determined to become a master at his craft, a goal spurned on by the direction of his new jazz teacher Terence Fletcher (J.K. Simmons). His skills improve due to the guidance of his tutor, but of greater note is how strict a teacher Simmons is. He uses brutal criticisms to not only push his students to the peak of their powers, but he forces them to the level of tears – Fletcher throws a chair at Neiman as he is getting to grips with the musical number Whiplash in his very first lesson – even to the point where they are performing so hard with their instruments that they are bleeding profusely. And it is so realistic and there are so few camera cuts during the music rehearsal scenes that you wonder how they could have made it look so real. The answer is simple: these scenes were done for real. Well, maybe not quite as ferocious as what we see, but there are few special effects used here; what you see is what you would get had you been on set for the filming of these scenes. It helps that the other students are largely compromised of real musicians.

And Fletcher does not hold back: whatever you think is “too far”, he goes beyond that, and then some. His delivery is as intense as could be, his general look and mannerisms exude intimidation, and he looks like he would sooner put a bullet in your throat than let you use it to produce music. In Neiman’s case, as he is a drummer, we see his eyes water and his mouth quiver with every brutal verbal shot fired at him by Fletcher as he is rehearsing and attempting to learn new routines with very little practice and with the knowledge that one error results in him being torn apart.

All of that makes Fletcher seem like a truly loathsome man. But, at the same time, one cnanot help but smile – and, at times, laugh out loud – at some of his criticisms. Some of his cutting lines are so unacceptable, so filthy, so far beyond the realsm of acceptable taste in a college environment that you can’t help but giggle, even if he is reducing his students to an absolute wreck.

Still, Andrew does improve. Too much, in fact: as he grows in confidence, it crosses over into arrogance as he willingly sacrifices a romantic relationship to pursue his dream to be, as he tells his less interested family, “the greatest drummer who ever lived”. But being pushed by Fletcher and his attempts to fight back by standing up for himself result in a car accident that one would assume crushes his dreams. But he gets back up, only to be treated like an afterthought by the uncaring Fletcher. Now, Andrew does fight back, for real, and both are taken away from the environment which turned them into monsters.

However, their story does not end there. A chance reunion leads to them coming to an understanding, and even building something of a friendship as Fletcher invites his former student to perform at a major jazz festival. This is Andrew’s chance to prove his talent once and for all. However, will he get the chance, or is Fletcher setting Andrew up for one giant fall? And, once he discovers the truth, how will Neiman respond to what could be the greatest moment, or greatest disappointment, of his life?

The story is very engaging, and there are plenty of twists which ensure that the plot never becomes predictable. The high-drama scenes are as intense as could be, and one cannot help but be mesmerised at what is unfolding on the screen. Fletcher manages to provoke hatred and some admiration at the same time, although the former definitely outweighs the latter; and the same applies to Andrew, only in his case the latter definitely outweighs the former. And whilst Simmons is the undisputed star of the movie as Fletcher – he brings to the role an air of menace, passion and a demand for perfection that, along with his cutting yet at times hilarious insults and his generally high levels of intimdation and intensity, that he becomes one of the most memorable “villain” characters that you are likely to see – Teller is very good as Neiman, and his performance in the final scene can only be described as phenomenal. To explain why would spoil the ending, so I cannot elaborate; when you see it, however, you will come away feeling that you have just witnessed something momentous. All I’ll say is, you’ll be even more impressed to know this was all real.

Perhaps the greatest compliment that I can give Whiplash is that I was not expecting to see this film, I may not have gone to see it had I known it was a drama based on jazz music, and there are scenes which are a bit slow and even the climax, as spectacular as it is, made for an abrupt ending. Plus, I had not heard of most of the cast beforehand. But even with all that, I found Whiplash to be an extremely compelling movie that I would recommend to anybody. Unlike what I had done, you should definitely make specific plans to see what I consider to be a brilliant film.