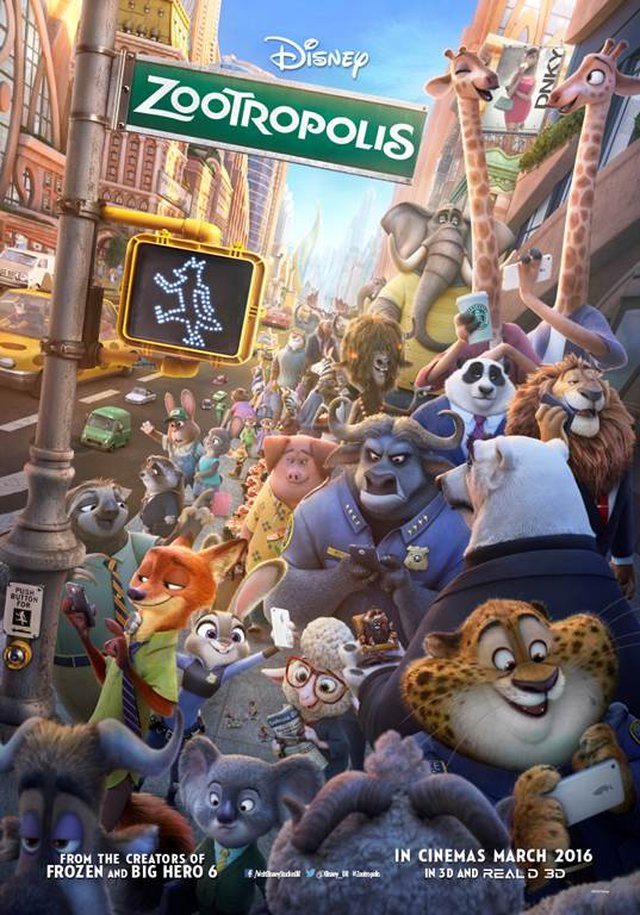 “Life isn’t some cartoon musical where you sing a little song and all your insipid dreams magically come true. So let it go.” – Chief Bogo

I see what you did there, Disney. Zootropolis, or Zootopia as it is in America and therefore in the wider world. Or Zoomania in Germany, just in case you read this in Germany with confusion. Schreien um meine deutschen fans!

Those changes force Disney to rename Zootropolis for territories where the title already has copyright. But while the company sees Zootopia as the true title, I believe Zootropolis is a more fitting name. Because this is a very modern movie in a very modern metropolis. Modern-day items like CCTV and phones are here as plot devices. And the Zootropolis really feels like a full, bustling city of different types. Zootopia is basically just a pun on ‘utopia’. Do people really love a pun that much?

But anyway, it is Zootropolis here in the UK, and it’s all the better for it. Since buying the Pixar company, the Disney corporation have used their acquired know-how to begin putting out their very own Pixar-like content, in terms of looks and almost in terms of quality too. This applies to Tangled (before Pixar, admittedly), Bolt, Wreck-It Ralph, Frozen, Big Hero 6 and now Zootropolis. They all move away from previous Disney storytelling devices for a talking animal, a video game, a robot and a Princess. In fact, they are almost anti-Disney.

Sure, they are still predictable stories with a be-true-to-yourself message. But how we get there is different from the norm. With few musical numbers overall, the Princess’ true love story is about her sisters. The tale of the talking animal actually goes a little Animal Farm. Yes, indeed, it hits us with a political story wrapped up in a classic ‘follow your dreams’ moral. But unlike every version of Animal Farm, at least Zootropolis does so entertainingly.

So, we basically follow Judy Hopps, a bunny rabbit from the country who not only dreams of living in the big city, but wants to do so as a cop. No easy feat when you consider most of the animal kingdom’s predators roam the streets of Zootropolis. But Judy and her boundless energy has proved to herself countless times that anyone who tries to tell her that being the “little guy” is a disadvantage in life is wrong. Standard fare so far, then, as is much of the movie for the first two acts.

She teams up with Nick Wilde – a con artist fox who grates on her; they have a standard, though quite intriguing, mystery to solve – to find the missing member of Zootropolis, and they do so through many exciting and often hilarious set pieces. The Godfather-inspired mob wedding provides several laughs, as well as the joke about the DMV being run by sloths, which is probably the stand-out moment of the movie. It’s standard, but it’s good-looking entertainment up to this point for the intended child audience and their parents (for whom there is even a Breaking Bad reference).

But once the mystery is seemingly wrapped up early in Zootropolis, we are hit with a whopper of a third act. All of a sudden, the audience are being confronted with the idea of how people deal with and, just as importantly, use fear. It is a hugely prominent part of modern-day politics, especially in this US election year, and arguably modern-day life since 9/11. And here, Disney confront that theme out of the blue, but without beating us over the head with it. With a kids movie! Yes, despite the mentions of 9/11, this movie is aimed at children. But they aren’t reading this review. (Well, hopefully; if so, please leave the Internet kids. It’s a bizarre and frightening place.)

The outcome of Zootropolis is fairly predictable early on. While it has a lot of heart, it doesn’t really have the same emotional weight as Up or Toy Story 3. It is not as visually interesting as the likes of Wall-E. But that is not to say that Zootropolis doesn’t look stunning, because it really does. So much thought goes into how all these animals live, transport and work together that it could rely on its sight gags alone, but thankfully it doesn’t. Zootropolis plays on our ideas of these animals and modern-day life, and how they blend together, and not just in a superficial way.

In Zootropolis, Disney doesn’t ask the audience to forget what we know about animals. Instead, they use our preconceptions on them to forward the plot. And rather than chase its 2D past, as it has been accused of doing before, Disney has instead taken the lead set by its ground-breaking in-house acquisition Pixar, and continues to push its own special Disney brand forward into the new modern-day with Zootropolis.