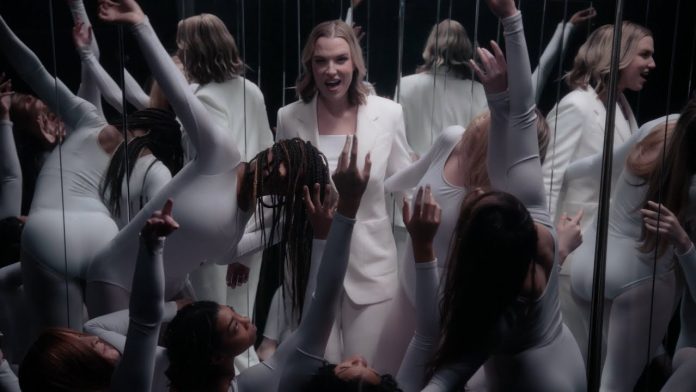 This is our review of Halestorm’s latest single, The Steeple. Written by front woman Lzzy Hale and Scott Stevens, the song was released February 4 2022. The Steeple is the latest single from their highly anticipated upcoming album, Back From The Dead. So, let’s take a look at The Steeple!

The Steeple is a three-and-a-half minute explosion of energy. Lzzy’s charismatic and powerful vocals shine on this track as always. The song follows the journey of the narrator back from a dark time in life – “It stopped raining in my head today” – and uses a metaphor of religion to convey the feeling of redemption. The inclusive lyrics in this song, such as “This is my church, you are my people” makes the song a strong contester for a show opener. The song allows for active crowd participation as it follows a chant-like rhythm towards the end.

The song remains catchy throughout and never fails to entertain. The upbeat drums and electric guitar make for a lively and fiery anthem of a song. The song is structured tightly and follows a simple yet effective dynamic of verse/chorus/verse/chorus/outro. The Steeple is a radio-friendly rock anthem that has so far been incredibly successful in streams for Halestorm. As of March 2022, the single is already almost at one million streams on Spotify alone.

The metaphor of religion is used throughout The Steeple to describe the journey recovering from depression: “A choir’s singing in my heart today/Like a thousand angels breaking the silent parade”. It’s possible Halestorm took inspiration for this metaphor from earlier female-fronted rock bands such as Flyleaf, who hit the top of the charts back in 2005 with their faith-based single All Around Me.

The Steeple sounds different from Halestorm’s previous releases. The song takes on a more positive message than singles previous from the band. Their biggest hit, I Miss The Misery, discusses the feeling of missing a toxic, abusive relationship. This song remains one of Halestorm’s most uplifting songs since their 2015 single I Am The Fire.

Halestorm seem to struggle to evolve musically. Their genre has always remained hard rock, sometimes with influences from metal or folk. Despite their songs remaining catchy and well-written, they seem to have always been releasing similar sounding music. The Steeple could just have easily been released by the band ten years ago as it could have been today. It would be interesting to see the band take influence from more modern rock trends, perhaps incorporating elements of other contemporary genres. Even a collaboration with a newer rock act, such as Greta Van Fleet or The Pretty Reckless, might help the band expand more in terms of style.

The Steeple confirms that Halestorm are a force to be reckoned with in the modern hard rock world. Lzzy’s dynamic powerhouse vocals shine brighter than ever on this track and the message of the song will make for a wonderful crowd-pleaser on their current UK tour. Despite struggling to really show a great deal of musical evolution, the song captures the heart of Halestorm. The Steeple has been a successful release for Halestorm and left fans in anticipation for their upcoming fifth studio album, Back From The Dead. We can only hope that the rest of the album will be as exciting and powerful as The Steeple!