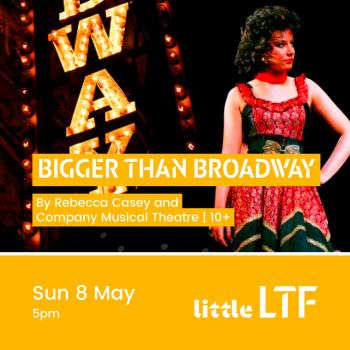 Synopsis Of Bigger Than Broadway

Bigger Than Broadway was billed as a journey through Broadway featuring some of the best musical talent of the Northwest with 4 part harmonies, beautiful costumes, choreography and a night you’ll never forget. Featuring songs from Les Mis, West Side Story, Phantom and many more I knew this show was going to be right up my street. Produced by Rebecca Casey and company, it was the show’s first time on stage at the Little Liverpool Theatre Festival and Sunday 8th May was its premiere performance.

Analysis Of Bigger Than Broadway

The show began with Tonight from West Side Story where all 4 performers featured onstage. It was a strong performance and a good example of what was to come. From the first song we were literally taken on a journey of Broadway classics. A voiceover informing us of the next musical section with facts about the upcoming show was a nice touch. Andrew Geater showed his fantastic stage presence in Dreamgirls. Michelle Terri and Rebecca Casey showed their great chemistry in Nowadays from Chicago. Luck Be A Lady tonight showed the vocal talents of Jake Holroyd with the pazzaz you would be expecting from a character like Sky Masterson.

The Phantom section of the show has to be referenced as we all know the title song is no mean feat but an excellent effort shown by Rebecca Casey. Special mention goes out to Michelle Terri for her rendition of Somebody To Love from We Will Rock You. For me it was the best performance of the night. What a performance and what a voice. There were a couple of technical issues in the Wicked section with For Good but Terri and Casey handled it with ease showing their true professionalism. Excellent light and shade portrayed in the Wizard and I, by Casey. I enjoyed Andrew Geater’s Joseph section and the screens at the side showed us glimpses from when Geater performed in the West End version of Joseph. He was clearly at home in the role of the Pharaoh, Andrew is a strong performer with an excellent voice.

Summary Of Bigger Than Broadway

All in all, a great effort given by the cast. I would have liked to have seen a little more blending when it came to the harmonies and tighter dance routines but that’s me being picky. With some more rehearsal time this show could become even slicker and I look forward to seeing where it goes. If I could wish for one thing for this show it would have been a bigger crowd. The crowd we had on Sunday were great, very appreciative and involved but I would have loved to have seen more bodies in the audience for the cast.

It Must Be Love Further Links

Did you see It Must Be Love? Let us know by leaving a comment below!