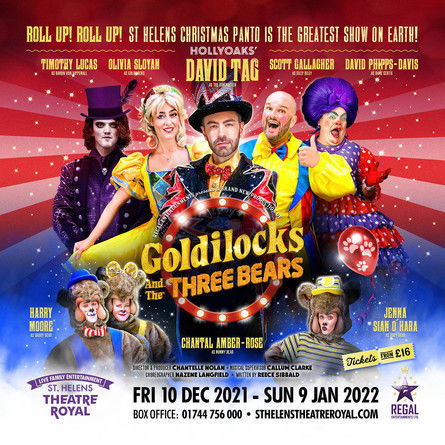 Goldilocks And The Three Bears

The circus comes to town this Christmas in Regal Entertainments’ magical pantomime, Goldilocks and the Three Bears. It promises to be just right with its mix of unbelievable circus tricks, madcap comedy capers, Regal Entertainments high production values, and a smash-hit selection of chart hits to sing and dance along to. Join Goldilocks this festive time, who, with the help of the Three Bears tries to save her Big Top from a rival circus owner! Get ready for a whole lot of family fun – it promises to be panto GOLD!

It’s been a while since I’ve been to a panto. 17 years to be exact so I had high hopes for Regal Entertainments version of Goldilocks And The 3 Bears. My high hopes were surpassed. Spoiler alert, I absolutely loved it.

The show began with our 2 main characters, Olivia Sloyan as Goldilocks and David Tag as the Ringmaster. They set the tone for the evening with a strong performance of Get Ready with a full ensemble of dancers, segueing straight into Dancing In The Street. Choreography provided by Nazene Langfield was sharp, spot on and executed extremely well and beaming faces were plentiful. The stage was full of so much talent and I was so happy to see a super-strong ensemble cast. Sloyan is no stranger to panto and she was brilliant. Clearly at home on the Theatre Royal stage, she was a perfect choice for our leading lady. Clear, confident vocals and a sweet and warm stage presence. Her and Tag worked together beautifully. David not only brought eye candy but bags of charm as the Ringmaster. His first panto but I’m sure we’ll see him in plenty of roles in the future.

Gerty played by David Phipps-Davis made her entrance and brought with her a huge breath of fresh air, not that it was needed. Full of panto dame campness, fun and flourish. She had my Mum and I in hysterics. We were full of anticipation for the next time she entered the stage as her costumes, not to mention the headpieces, grew more and more flamboyant as the night went on. Easily rivaling Priscilla. There’s not much else to say, Phipps-Davis was just outstanding. Silly Billy played by Scott Gallagher was another star casting. The kids loved him, as did the adults. He was so funny, perfectly quick-witted comebacks, sparky and full of cheeky chappie charm. The Pinky Winky scene in particular, had me creasing. Just brilliant.

The story is based around Goldilocks trying to save the three bears from a rival circus after Baron Von Vippemall steals them from Gerty’s circus. It’s a fun story full of your usual panto-style traits.

We were treated to lots of show-stopping performances including silks, aerial hoop and even fire. The show moves along quickly despite the laughing and ad-libbing. That said, there are a couple of lulls as would naturally happen with it being such an ‘up’ show but these were infrequent and not at all out of place.

Timothy Lucas played our panto villain and what a performance he gave. Rightly disliked by the kids, there were plenty of jeers and boos towards him. His accent became more and more ludicrous as the show went on, which had all the adults in bulk. It started as a Borat-style accent and then we were treated to Scottish and even German at one point! The Bee scene with Billy was a particular favorite of mine. The on stage camaraderie between the two was clear for all to see.

The show ended of course with a happy ending and the finale was where the costume department really came into their own. Full of colour, sparkles and sequins, it was the perfect choice for those glitzy finale costumes.

The kids in the theatre seemed to really enjoy the show, as did the adults. There were lots of opportunities for the kids to join in and we even saw four of them up on stage at the end. Special mention to audience member Thomas who won the hearts of everyone in the audience; what a great sport. The staff at the Theatre Royal were great as always and there were chances for photos with the cast after the show.

This panto is a must-see. It’s a full on family experience full of festive fun and laughter. Reasonably priced tickets make this a perfect day or night out and you will definitely leave with a huge smile on your face. Go and see it right now!

Goldilocks And The Three Bears runs at the Theatre Royal St Helens until January 9 2022. Further details can be found here.

Did you see Goldilocks And The Three Bears? Let us know by leaving a comment below!