Description Of Singin’ In The Rain

We meet Don Lockwood (Sam Lips) and Lina Lamont (Jenny Gayner). They are Hollywood’s leading on-screen couple during the era of silent movies. And their collective star power makes Monumental Pictures the leading film production company in America. However, the release of the first talking movie The Jazz Singer changes the game. As a result, the decision is made for Lockwood and Lamont’s next film The Dueling Cavalier to be even bigger. That happens via the decision to make TDS an all-singing, all-dancing and – crucially – all-talking movie.

But there’s just one problem. While Don can hold his own, Lina isn’t exactly an eloquent talker, and her singing talents are – well – questionable. Step forward Kathy Selden (Charlotte Gooch). Don has a chance meeting with Kathy, and they soon enter into a romantic relationship with one another. So much so that Don and Cosmo Brown (Kevin Clifton) come up with a foolproof idea. Lina can visually speak and sing on the screen, but in reality, Kathy is providing the actual audio. It sounds perfect – until Lina finds out, and her ego clouds her judgement. Yet the movie (now renamed The Dancing Cavalier) is doomed unless this swerve was taken. So, can the movie succeed thanks to Kathy, or will it fail thanks to Lina?

Analysis Of Singin’ In The Rain

First of all, it’s a timeless story from a movie that is 70 years old. And the classic tale is as enjoyable as ever in this production. The performances are terrific across the board as everybody plays their role very well indeed. Then, we get to the comedic elements, such as the initial talking version of The Dueling Cavalier. The show doesn’t break the fourth wall, but it does bring us behind the movie cameras. And this leads to plenty of clever in-jokes, with comedic timing especially being central to the physical comedy.

Then we come to the real highlights: the big singing and dancing numbers. The scene from which the title comes is fabulous, with excellent rain effects. You feel like you’re watching something special when Don Lockwood dances in the rain and even splashes audience members! Good Mornin’ is the other standout number, but almost every musical scene is a must-see. Especially the extended tap-dancing scene as per Cosmo’s insistence on The Dancing Cavalier featuring one such moment. I also love the subtle appearance of the famous Hollywood sign in the top corner of the set. It’s a reminder of how the spectre of Hollywood is impossible to ignore when you’re in the movie industry.

Summary Of Singin’ In The Rain

This was the first show I watched prior to creating Writebase back in 2014. It was tremendous back then, and it’s still tremendous now. From great songs and awesome dances to logical storytelling and creative comedy, this show has it all. So, make sure not to wait until the (Good) Mornin’ and come along to see this wonderful production! 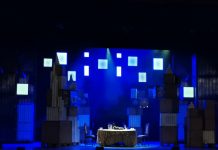