Synopsis Of The Book Of Mormon

In the beginning, we meet ten trainee Missionaries of the Mormon faith at a Missionary Training Centre. Two Elders of totally opposing personalities, Kevin Price (Robert Colvin) and Arnold Cunningham (Jacob Yarlett), are paired with one another for their mission. And while other Missionaries are sent to the likes of Japan and France, Price and Cunningham are assigned to Uganda. Price is already concerned, whereas Cunningham – a young man of low self-esteem but high excitement – is ecstatic. Nevertheless, they share the same goal: to spread the word of Mormonism in unfamiliar surroundings.

Yet the scale of their task becomes evident as soon as they land. Indeed, their bags are stolen almost immediately, and they’re confronted by angry villagers about their mere presence in Uganda. So, it won’t be easy to establish the Mormon faith in their two-year home. And they soon learn from the other trainees on-site that nobody has ever been baptised as a Mormon there. Price starts to doubt whether their goal is even possible, but Cunningham assures him that their quest isn’t in vain. Meanwhile, the villagers themselves are at risk by a local warlord and his small army of soldiers. So, we have to wonder: can Price and Cunningham convert this Ugandan village to accept Mormonism? And due to the threat of the warlord and company, is it even safe to assume everyone can survive?

Analysis Of The Book Of Mormon

This is the show I’ve been waiting to see for ages and ages. As a longtime South Park fan, I’d previously seen the hilarious episode All About Mormons in 2003. And so I went into this show essentially expecting a larger-scale version of that edition of South Park. Yet it ended up being totally different from my assumptions. To be fair, Mormonism is occasionally called into question, as are numerous other religions. But it’s actually a surprisingly heartwarming take on how Mormonism can improve people’s lives. It’s much more parody than preachy, yet the message remains the same: positive beliefs can have a positive impact. And as the show progresses, we see how the main criticisms of Mormonism are, in some respects, the religion’s strengths.

Because it’s a Trey Parker and Matt Stone production, the tone is occasionally very dark. But it’s also undeniably hilarious, at least to those who know what to expect. Amongst the songs are some unforgettable, sometimes shocking, but truly fantastic numbers. It’s the Parker and Stone formula; it’s so ridiculous that you can’t help but laugh. And how the cast themselves don’t burst out laughing at some of the insane dialogue, I’ll never know. Speaking of the cast, this is a superbly-talented crew with equal ability to sing, dance and elicit belly-aches of laughter. Furthermore, the sets are very impressive, and it’s easy to feel like we’re right with Price and Cunningham in Uganda.

Summary Of The Book Of Mormon

It’s hard for me to discuss the main positives of the show without giving spoilers. So, I’ll just say that some scenes are truly hilarious and will have you in a state of disbelief. But those elements are secondary to the true story of how Mormonism can benefit people’s lives. Its message is: even if you don’t believe Joseph Smith’s story, that doesn’t mean it can’t help your life. Then add to that the satisfying conclusion, the impressive dances, the well-crafted songs and the outrageous comedy. The end result is one of the more memorable theatre shows that you will ever see.

In all honesty, as funny as it is, I expected a little bit more from a comedic standpoint. But maybe that’s because I went in with such high expectations. And also because I was sorta anticipating a real-life South Park episode on the stage. So, that’s not what you should expect to see here. But what you can expect is a terrific musical of the highest standard that will provide countless moments to recall. The show runs in Liverpool for several weeks, and I absolutely recommend that you check it out. It may just help your life too! 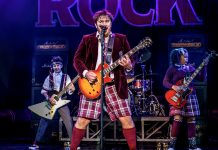