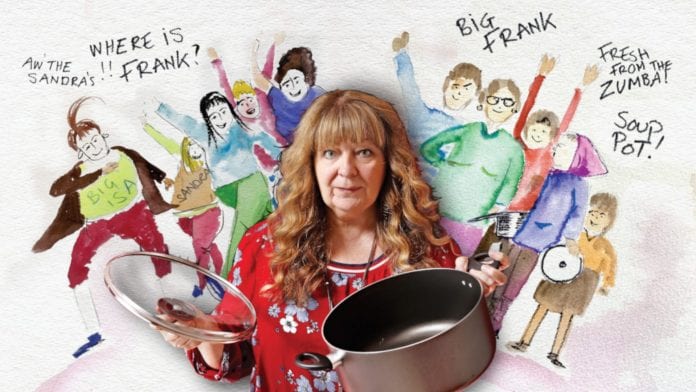 A favourite of Billy Connolly and lauded by critics for years, Janey Godley is surprisingly only now embarking on her first tour of England with Soup Pot, which included a visit to Liverpool’s Epstein Theatre.

Godley introduced herself to her Liverpool audience with a story about her husband, who, decades into her marriage, revealed that he is related to Bill Shankly. When she asked her husband why he never mentioned it before, he replied “you never asked.” Cue an audience roaring with laughter from the start.

However, as Godley unpacked the story further, she revealed that her husband, who she had been with since she was 18, has autism. As the stories about her husband and family life continued, Godley did not hold back and even made reference to people being offended, but the audience loved it. It was clear through her comedy that there is genuine tenderness and affection in her relationship, and that her marriage is to all intents and purposes just like any other.

The first quarter of the show gave us a fascinating insight into Godley’s background. When she married her husband, she also married, unbeknownst to her, into a family of gangsters. The show also had a strong political element. Godley revealed that she is an SNP supporter and a Protestant. Her material on sectarianism in Scotland was hilarious, and lasted just the right amount of time, preventing it becoming divisive.

From that the show moved into a video section, where Godley shared some of the short videos she clips from the news and adds her unique voiceovers to. The subjects included Boris Johnson, Nigel Farage, Nicola Sturgeon, Jeremy Corbyn, The Queen and Jacob Rees Mogg. The comedy moved between satire to straight taking the mickey, and the combination worked well. This video section, while funny, was slightly too long, and this was also the case in the second half.

Her stand-up was so fascinating and intriguingly funny that it would have been good to have more of that, especially for audience members who may have been seeing her for the very first time in any medium. The second half featured a particularly long section about her dog, who also appears on Godley’s social media but it was funny nonetheless, and Godley painted some wonderful pictures, such as of herself pushing her dog in a pram.

Godley’s material on aging and its benefits and was very well observed and struck a chord with an appreciative audience. While making it clear she takes no hassle from anyone, Godley also came across as warm, un-judgmental and kind – even accepting a ringing mobile phone from within the audience with good grace, and telling the audience to tell themselves they are beautiful.  Her affection for her audience was clear, and resulted in her posing for selfies at the end of the show.

Janey Godley made herself at home in Liverpool, and I hope that she decides to come back soon.