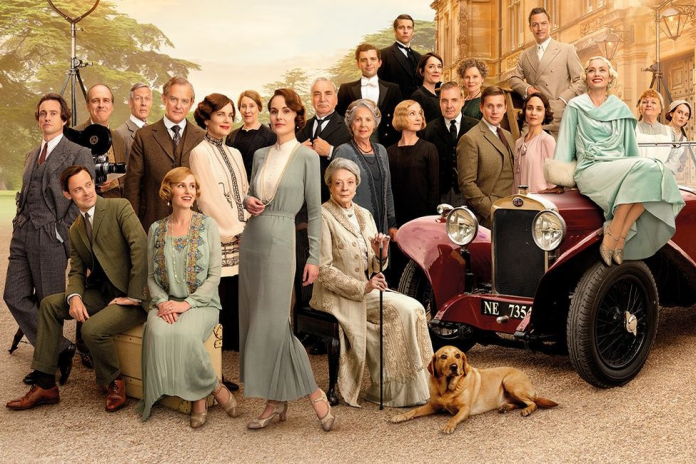 Downton Abbey: A New Era is the second film released based on Julian Fellowes’s acclaimed period drama. Following the lives of the Grantham family, from the lords and the ladies of the house to the servant’s downstairs. The film has two main plots, the ‘A’ plot surrounds the inheritance of a French Villa and Countess Grantham’s secret, and the ‘B’ plot is about a film being filmed at Downton with all the usual problems encountered with filming.

First and foremost, the cast are as wonderful and charming as always. While the first film left some cast members out, the sequel brings a lot back while introducing a few minor new ones. The standout of this movie is Maggie Smith. she returns to her role as the witty Violet Grantham, having more screen time then in the first film and a bigger importance in both stories.

In comparison to the first film this is a rare case where I think that the sequel is just as good as the original, if not surpassing it. The original suffers by having a story which doesn’t have much in terms of impact on the family whereas this one throws the family into a new, life changing situation as well as giving it a meatier story to work with.

Both plots work effectively indifferent ways. The A plot showcases beautiful set designs while indulging in a simplistic mystery. It’s dramatic for Lord Grantham who struggles with his identity as well as the secret his wife is hiding from him. The B plot keeps us in the central location of Downton Abbey. Dressing it up in the glamour of the late 1920s with an abundance of romantic drama.

It still has that beautiful way of writing romance in that signature Downton style. Even with little time they still develop the romances in a meaningful way that’s a delight to watch unfold. From Mary’s new tryst with the director, played by Hugh Dancy to the long-standing romance between Mr Mosley and Miss Baxter. It’s heart-warming and feels so rewarding when the characters do eventually get together.

This film is a definitive end to the franchise. They could potentially continue if they wanted to but with the ending, it seems unlikely they’d want to. If they choose not to continue after this film, I’d be content with the ending. It ushered the characters into the ‘New Era’ and it truly felt like a deserved ending.

Downton Abbey: A new Era balances a lot of characters. When you have over 20 different named characters to fit into a two-hour film, you’re going to experience some rushed story elements. It’s obvious in this. It edits quickly between the characters scenes between France and Downton and it’s noticeable. They can get away with it in the show but not in this film. Some plots also felt shoehorned in like the secret that Cora hides and Thomas’ new romance. Cutting some of the plots would mean the other plots had breathing room and development time.

Speaking of Thomas’ love life that’s another con of the movie. In the original movie Thomas was set up with Richard Ellis. Here he’s put together with a new partner and yet there’s no kiss. In a movie with romance and other people kissing each other it felt a little unusual that Thomas didn’t get a kiss. Julian Fellows is mixed when portraying LGBT themes and it proves to be the same here. From a lesbian perspective, he’s gotten better in recent years however there is room for improvement.

The last problem it suffers from is the resolution of some of the storylines. The bigger storylines resolve in a natural manner in a good flow, without feeling they end too quickly. The smaller plot lines are a different story. Some of them end as quickly as they begin. Shen some of the plots are genuinely interesting and engaging which makes it tragic when they’re forgot.

The stakes of this film weren’t life or death but I don’t think that they needed to be. After the past couple of years it’s nice to have a film that shows people working to get their happy ending. If you’re looking for some stylish, historical escapism then Downton Abbey 2: A New Era is the film for you.