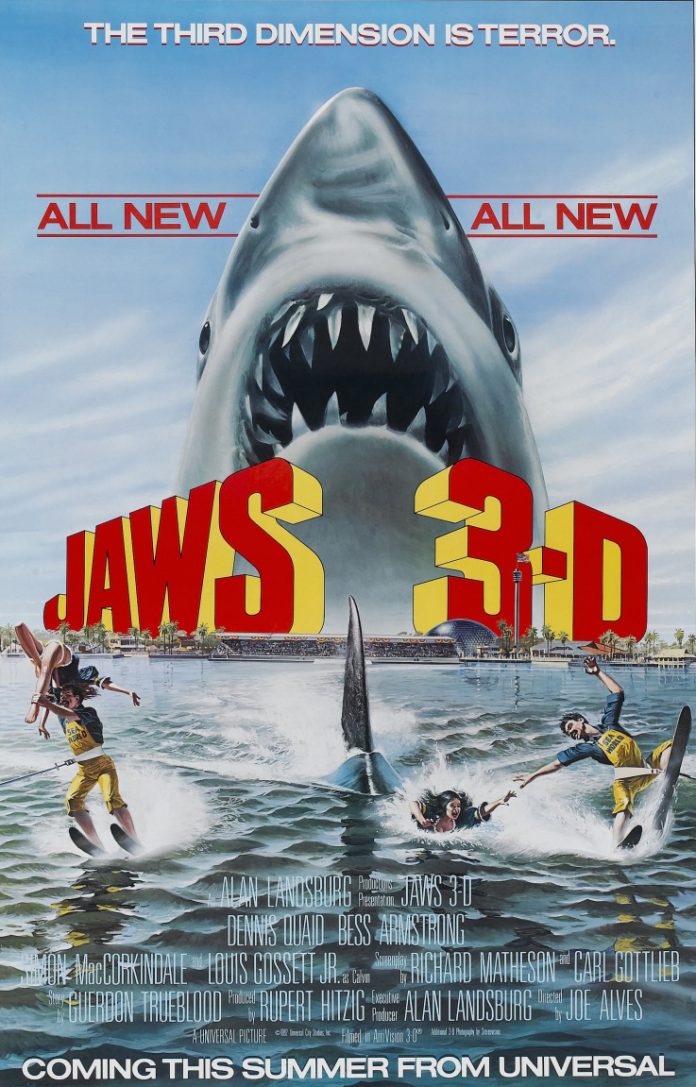 Still in the midst of an avalanche made of final year university deadlines that encumbers me, I found it necessary to visit my favorite movie franchise. The whole reason I want to do film, the king of the creature feature – JAWS! Unfortunately, someone has already published a review for Jaws (Spielberg, 1975) onto our website (be sure to check it out here) so I have to settle with reviewing one of the sequels. Fortunately, that meant I had two other Jaws films I could review before having to go anywhere near Jaws: The Revenge (Sargent, 1987). The threequel (Jaws 3-D) follows plot and story points that would go onto be ignored when the final film in the franchise was made. However, I found the change of setting from Amity to SeaWorld a refreshing change. A change of location that had a lot of potential.

Set in SeaWorld, a Florida marine park, the park prepares for opening as a young great white infiltrates the parks underwater tunnels and lagoons from the sea. What follows is seemingly the adolescent great white shark attacking and killing the park’s staff. Michael Brody (Dennis Quaid) , son of legendary chief Brody (Roy Scheider) and Kay (Bess Armstrong) are informed of a mechanic’s disappearance. The two go down in a submarine to look for their body only to encounter juvenile great white shark. Knowing the cause of the disappearance the two capture the shark. However, resembling the Mayor from the first film, park manager Calvin Bouchard (Louis Gossett, Jr) sees it as a lucrative business opportunity and orders the shark to be moved to an exhibit.

Later they finally find the mechanic’s body. Kay is tasked with reviewing the body, in doing so she reaches a frightening conclusion. The damage to the body doesn’t match the shark they captured but must be of the juvenile’s mother measuring a whopping 35ft (11m). Kay luckily manages to convince Calvin of the development when the mother herself shows up at the window of the underwater café. The mother great white shark begins to wreak havoc throughout the park. One memorable scene being where it traps a large number of visitors in a section of the underwater tunnel. With water slowly rising more and more. With each shot of the location adding tension throughout as the other parts of the story play out. Shark hunter Philip FitzRoyce (Simon MacCorkindale) narrowly manages to lure the shark into the filtration pipes, when his tether rope snaps suddenly leading him to be attacked and killed. Whilst the shark is trapped Calvin has the idea to shut suffocate the shark.

So, he orders the pump to be shut down. Which actually backfires however as it lets the shark break free from the pipe. The newly loose shark then attacked Michael and Kay, yet they are saved by the SeaWorld’s dolphins. Fleeing to the control room only briefly before the shark appeared yet again, unrelentless in its chase. The shark smashes through the window and kills a technician. Quickly thinking Michael notices, a grenade on the corpse of FitzRoyce still lodged in the shark’s throat. Using a bent pole Michael manages to pull the pin, triggering the grenade’s explosion and perfectly calling back to the initial explosion in Jaws. This in my opinion makes it feel like the perfect bookend to the Jaws trilogy. Ending Jaws 3-D the same the original masterpiece. Well, that was of course until the rotting whale carcass known as Jaws: The Revenge floated ashore some years later.

The film falls short of the masterpiece that is the original , however it can’t be entirely dismissed. The film proposed a lot of story ideas to move the story of Jaws along. Yet all these story details were dismissed and forgotten by the time it came to producing Jaws 4: The Revenge. Something that anyone can see was a dire mistake, with Jaws 4: The Revenge being panned by both critics and fans. With the main plot revolving around the shark following the to the Bahamas. A film so poor in quality, star Michael Caine only did it as a “cash grab”. Jaws 3-D for me at least will always be the ending of the franchise I choose to acknowledge. Personally feeling the new story elements and moving away from Amity, in some small part, makes up for the terrible special effects.

Jaws 3-D is available to watch on Amazon Prime.